Dalia Stasevska was appointed Principal Guest Conductor of the BBC Symphony Orchestra in July 2019. Her charismatic and dynamic musicianship has established her as a conductor of exceptional versatility. 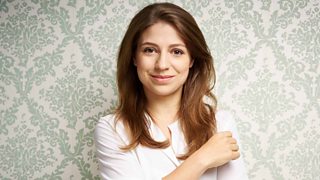 "The BBC SO is a very inspiring, energetic orchestra with a huge range of colours in its sound, and I am looking forward to working together over the next few years, exploring a wide range of music.”

A passionate opera conductor, Dalia will make her debuts with Malmö Opera to conduct La Traviata in a production by Olivier Py and with Kungliga Opera Stockholm for Don Giovanni, directed by Ole Anders Tandberg. She will also visit Opéra de Toulon for her debut with Eugene Onegin. This follows engagaments with Finnish National Opera where she conducted The Cunning Little Vixen and with Norwegian Opera, where she could be seen on the podium of Lucia di Lammermoor.

Away from the concert stage, Dalia is a keen supporter of young musicians. In her Finnish homeland she founded the Kamarikesä Festival in Helsinki, of which she is also the Artistic Director.

Dalia Stasevska was born into a Finnish-Ukrainian family of painters. Originally educated as a violinist, violist and composer at the Tampere Conservatoire and the Sibelius Academy. As a conductor her teachers include Jorma Panula, Leif Segerstam, Hannu Lintu, Jukka-Pekka Saraste, Susanna Mälkki, Mikko Franck and Sakari Oramo.