Handsome, debonair, the man who allegedly turned down the role of Doctor Who because of “all the baggage”, marched round the newsroom shouting as the irascible but glamorous newspaper editor in State of Play, drawled as the flaky rock star in Love Actually, Bill Nighy seems to be as popular with men as he is with women.

To celebrate Bill Nighy’s performance in Charles Paris Mystery – a gripping detective drama based on Simon Brett's Charles Paris novels – we’ve put together a list of why we (all) love him. 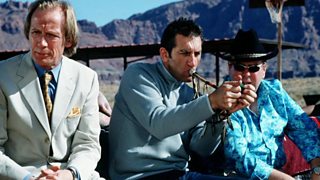 I am world class at not getting around to stuff.

Stylish is the word for Mr. Nighy. “I never wore T-shirts even when I was supposed to wear them,” he says. “Never felt I had the right shape. Couldn’t do a T-shirt justice. And I don’t do unshaven well either. It makes me look like someone about to have a breakdown.”

Lover not a fighter

He has never hit anyone. Why? “Blokes fighting just look horrible. Their faces go funny, their bodies look stupid, they get dirty, their clothes don't look good any more… Apart from the fact that it hurts.”

“I am world class at not getting around to stuff,” he says. “I did once give a dinner party. But it was a long time ago and it won’t happen again.”

He’s a huge football fan, particularly of Crystal Palace, and is president of Crystal Palace Ladies Football Club after he met the cabbie who manages them. He nearly passed out with excitement when he met Ryan Giggs, and had to delete the photo he took with him as he felt he looked so awestruck and ridiculous. His other main passions are Bob Dylan and the Rolling Stones.

His advice to young actors is “don’t take drugs and pay your taxes.” That’s what he wishes someone had said to him.

I don’t think I can get through the rest of my life without a dog… no parties. A big fire. A dog. A reasonable television so that I can watch football. Alan Hansen at half-time. Near the kettle.

Bill on a bike

It took him seventeen attempts to ride the motorbike with Judi Dench on the back out of shot in the Best Exotic Marigold Hotel.

Playing Davy Jones in Pirates of the Caribbean is “kind of cool’, he says. “I love playing a half squid/half crab guy because you can get away with a level of acting that if you tried it anywhere else they'd arrest you for crimes against acting.”

Regrets, I’ve had a few…

He describes himself as having been “pretty lucky… There’s a few haircuts I regret, a few pairs of trousers I’d like to have another shot at.”

“I don’t think I can get through the rest of my life without a dog… no parties. A big fire. A dog. A reasonable television so that I can watch football. Alan Hansen at half-time. Near the kettle.”

Oh Bill, may we join you?