How to save someone suffering from heat stroke

About 2,000 heat-related deaths are thought to occur in the UK each year, but during a heatwave there can be hundreds more. With 2016 on course to be the hottest on record according to the UK Met Office, and average temperatures expected to soar in the years ahead due to global warming, it’s been estimated that these figures could rise by 250% in the next few decades. 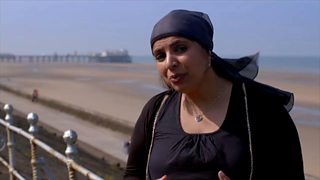 Heat-related health effects can start at even fairly moderate temperatures, and because most people in the UK are not acclimatised to very hot weather it means we are at potentially higher risk of suffering from heatstroke. This is when the body is no longer able to cool itself and a person's body temperature becomes dangerously high. It is much more dangerous than merely feeling hot and bothered and can kill in as little as 30 minutes so it’s vital to recognise the warning signs and take action when necessary.

Those most at risk of heatstroke are older adults and young infants, people with long-term health conditions and those who are overweight. But it can also be dangerous for fit and healthy people – especially if they are doing strenuous exercise in high temperatures.

There are various stages which people are likely to go through before they reach the critical stage of heat stroke, and it’s vital to be aware of these warning signs.

First, you might spot symptoms of heat exhaustion which can include:-

Heat exhaustion can normally be treated simply by getting out of the sun and rehydrating.

If you start to spot the signs of heat exhaustion, don’t ignore them: seek shade, drink some fluids and take a break.

One of the keys to allowing our bodies to cool down is evaporation. In order to offload heat we must allow sweat to evaporate. So if someone is showing the signs of heat exhaustion you can help them cool down by removing any unnecessary clothing to expose as much of their skin as possible.

One useful tip if you need to cool down quickly is to immerse your hands in cold water. Putting ice packs in areas where there are major blood vessels – such as the armpits – will also help rapid cooling.

Heat exhaustion is not a life-threatening condition in itself, but it can be a precursor to heat stroke, which is far more serious, if action isn’t taken.

As well as the displaying the symptoms of heat exhaustion, someone who is succumbing to heatstroke could show symptoms of:

People with heatstroke generally look unwell and might have difficulty breathing. They may also be confused and irritable, so if you’re with a group, look out for each other – particularly the elderly and young children, and those doing physical exercise on a hot day.

Give any victim fluids to drink, if possible cool their skin by placing wet clothing on it, and move them somewhere cool. Heat stroke is a serious, life-threatening emergency – so if you suspect someone is displaying the symptoms you should call 999 as soon as possible.

With rapid cooling and sufficient rehydration most people do survive heatstroke – but prevention is key. If you're travelling abroad to a hot country, be particularly careful for the first few days, until you get used to the temperature. You should also heed heatwave warnings, by staying out of the midday sun and wearing a hat and cool cotton clothing.