One of the highlights of the Edinburgh International Festival moved to London's National Theatre in September 2014. This vividly-imagined trilogy brings to life three generations of Stewart kings who ruled Scotland in the tumultuous 15th century.

Introduction to the James Plays by Rona Munro

Rona Munro’s introduction is taken from the published text of The James Plays, published as a trilogy by Nick Hern Books. 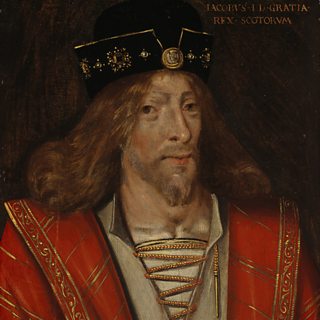 The process of writing these plays has been long (though not as long as you might suppose) and, at the time of writing this introduction, it’s ongoing.

I am currently in rehearsal with the most extraordinary company of actors in the longest, most challenging, most terrifying and most exhilarating rehearsal process I have ever experienced.

I’ve long had the ambition to write on this scale. However, having the ambition is one thing. You also need the ability and the opportunity.

It’s an unfortunate fact that very few contemporary playwrights get the writing commissions that allow them to develop the ability to write on a large scale, still fewer get the opportunities thereafter.

If you enjoy these plays at all you should understand that I owe a debt to a series of theatre companies and other organisations who support and develop new writing for the stage and who have allowed me to grow to the point where I felt able to go for the big dream.

These plays are set within a period of Scottish history which is virtually unknown. I feel a certain responsibility, therefore, to alert you to the fact that some small liberties have been taken with known events in order to serve our stories.

Certain characters represent amalgamations of many characters or stand for political forces within Scotland. Certain events have had their timelines altered to maximise the drama. However, as far as narrative imperatives allow, I’ve followed history and used primary sources.

We cannot know the character and thoughts of these dead kings and queens and long-gone Scots. We can speculate a whole series of possibilities from the few hard facts we can rely on, the slim historical evidence of their actions.

However, I feel robustly certain that whatever their thoughts and feelings might have been, human nature is exactly the same now as it was then. Only culture and circumstances have changed.

I’ve translated and used words from the 15th century within the plays, so you’ll read songs with lyrics taken from The King is Quair, the love poem written by James I himself.

There are versions of work by the wonderful poet Robert Henryson and of anonymous authors whose words have still come down to us.

If any ghosts are offended by my appropriation and free interpretation of their work, I hope they’ll still appreciate the wider publicity.