Dark arts: Holbein and the court of Henry VIII

To accompany the dramatisation of Wolf Hall on BBC Two, WALDEMAR JANUSZCZAK takes a look at the life and work of Hans Holbein, court painter to Henry VIII and the artist who brought the Tudor age to life. Here, Waldemar considers Holbein's influence and whether his complicated past and German, Catholic heritage point to a hidden agenda.

Given what is happening politically in Britain today, there is a rather delicious irony about the fact that the archetypal English king, Henry VIII, owes so much to a foreigner. Worse. The foreigner was a German, and probably a closet Catholic. Awkward!

Without Hans Holbein, Henry VIII would not be as famous or, indeed, as infamous, as he is; British art would definitely be more provincial, and might still be going through its Morris Dancing phase; and no way would we be as obsessed with the Tudors as we are. 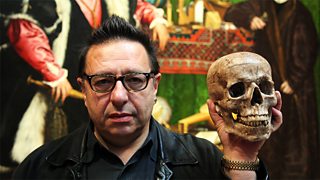 Look at Holbein's portraits, and you have Henry VIII, the widest king in Christendom

I actually do not think Hilary Mantel would have written Wolf Hall if Holbein had not made something so memorable, so tangible, so wickedly fascinating of Henry VIII. Look at other people's portraits of the king, and you see an ordinary Tudor. Look at Holbein's portraits, and you have Henry VIII, the widest king in Christendom.

But you probably know that already. The fact that Holbein basically invented the Henry VIII we all recognise today is hardly a secret. Open any school history book and there he is. As are the wives he variously married and beheaded: most of whom were painted by Holbein as well.

When the poor man arrived in England for the first time in 1526, he was dumped right in the middle of one of the most disruptive and toxic of all stretches of British history.

And the fact that he was as good as he was – that he was one of the greatest portraitists of the Renaissance – is so fortunate, it almost seems pre-ordained. He could have been a decent hack, and no more, like all the other painters at court.

But he wasn't. He was Johannes Holbein, a genius from Bavaria.

Christ in the Tomb by Hans Holbein, Basel Kunstmuseum

Something that did surprise me was how little was known about Holbein before he came to England. 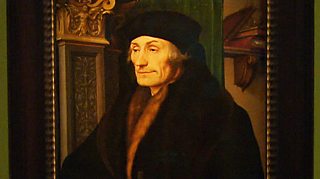 How on earth did the boy who has all these pops at all these juicy 16th century targets end up working so dutifully for Henry VIII?

Because the image he created of Henry and his court was so strong, there was a tendency to ignore the rest of his career. But he was nearly thirty when he got here for the first time, and already had behind him a very successful life as – and this is where it gets tricky – a religious painter. That's right, a religious painter.

In fact, Holbein had painted very few portraits before he arrived in England. What he was best known for in Basel, where he worked before coming to London, was his illustrations for various printed religious texts; and the highly catholic religious art he produced for churches and cathedrals.

The first time I saw the so-called Darmstadt Madonna, a particularly beautiful altarpiece of the Virgin Mary and Jesus, surrounded by saintly donors, I thought it was the work of an Italian.

The more I looked into Holbein's past, the more complicated it became. He was actually born in Augsburg, in 1497, the son of another particularly Catholic religious painter from Bavaria, called Hans Holbein the Elder.

The dad was fiercely talented too. So talented, it's difficult to understand why he himself isn't better known. And he must have been a really good teacher because by the time Holbein the Younger was 17, he was already in Basel doing remarkable things.

A particularly important discovery, for me, were the illustrations which the young Holbein produced for a wicked satire on modern society written by Erasmus, the great Dutch naysayer. In Praise of Folly, as the book was called, is basically one long Mickey-take of modern European values. From start to finish, it criticises everyone in power.

Holbein was only 17 when he began scribbling down naughty illustrations for In Praise of Folly. They are hilarious, and irredeemably satirical.

How on earth did the boy who has all these pops at all these juicy 16th century targets end up working so dutifully for Henry VIII? Unless, of course - and this is where it grows really interesting - he wasn't as dutiful as we think.

That really would set the cat among the pigeons, wouldn't it?

Waldemar in front of Holbein's The Ambassadors