Should we stop asking celebrities for selfies?

Intrusive selfie requests contributed to actor Ewan McGregor's decision to leave the UK, but why is it a problem to ask a celebrity for a photo?

On the surface, it doesn't seem too much to ask for. You spot a famous person, ask them for a quick photo and that's the end of it.

But our selfie-obsessed culture has played a part in Ewan McGregor's decision to leave Britain for the US. Speaking recently he described how requests for "soulless" selfies were affecting his ability to travel about London freely, and bemoaned how they have put an end to meaningful exchanges with fans. 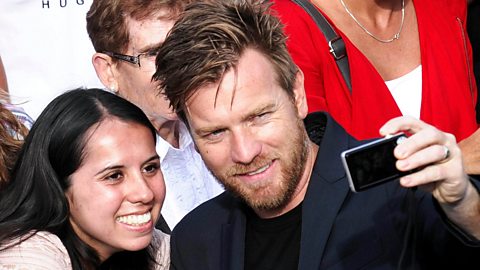 Is it wrong to ask a celeb for a selfie?

Selfie requests led Ewan McGregor to quit the UK, but why is asking for a photo a problem?

Entertainment journalist Clare O'Reilly is sympathetic to McGregor's claims. Speaking on Mornings she suggested that social media has emboldened people to ask for photos.

"Nobody wanders around going, 'I’ve got this lovely selfie on my phone of that time I met Ewan McGregor,'" she said. "People take [a photo] so they can post it on social media and revel in that moment.

"What would be more genuine is an exchange of, 'I hated you in this film, I loved you in that film, this is my favourite line', that kind of thing.

"Because, ultimately, actors are fairly needy creatures and having that two-way conversation would probably be far more worthwhile."

The rise of the selfie

Ewan McGregor is not the only celebrity to lament the rise of the selfie, according to Clare.

"Chris Pratt has said he’s not doing selfies anymore because he feels that it’s stealing the moment that you’re in to brag about it. And Justin Bieber has said that having selfies taken all the time makes him feel like a zoo animal."

Of course, some might say that celebs are being too precious, that this is simply the way the world works these days, and they might do well to remember the fans who put them in their elevated positions.

The suggestion that celebrities should put up with it because fans pay their wages through the likes of cinema tickets or Netflix subscriptions has some traction, Clare admits.

"There is the argument that [they] should just pose for them," she says.

But it might take a braver soul than most to put that to a passing celeb.