One of the biggest problems for surgeons when operating on cancer patients is knowing how much tissue to remove, and how much to leave. Whilst you don’t want to take away too much healthy tissue, the prospect of leaving cancerous tissue in a patient can result in distressing repeat surgeries for the patient, and a higher risk of problems after surgery. 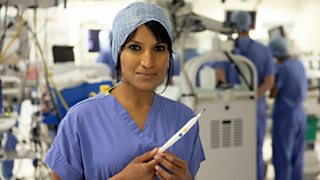 But in future, to avoid this risk, a new ‘intelligent’ device is being developed to help surgeons detect cancerous tissue.

The iKnife, like many other surgical tools, is an ‘energy device’. That is, rather than cutting tissue, it emits energy which interacts with tissue to produce heat, which cuts the tissue and also cauterises it to prevent bleeding. A by-product of this interaction is smoke. Previously, this was discarded as waste, but now, scientists are investigating whether chemical analysis of the smoke could detect the difference between healthy and cancerous tissue.

The basic principle is using mass spectrometry to chemically analyse molecular differences between healthy tissue and cancerous tissue. These chemical differences exist in the smoke emitted from the tissues. Mass spectrometry profiles are like a graph, with spikes at particular intervals depending on the ratio of molecules. Essentially each profile is like a fingerprint. The iKnife is being developed by analysing thousands of tissues to build up a database of mass spec fingerprints. The idea is that mass spectrometry conducted in real time during surgery will be able to compare the result against this database and distinguish healthy from cancerous tissue.

The iKnife is currently undergoing numerous trials for various different cancers, including prostate, brain, ovarian and colorectal. The main aim for the iKnife development at the moment, is to continue building the database, and to test the accuracy of the iKnife compared to the surgeon. For this reason, the surgeon does not see the results of the mass spectrometry whilst performing an operation – their judgement must not be influenced by the device just yet!

Once enough data has been collected, the iKnife will move into a randomised clinical trial. During this phase, the iKnife will be used in some operations and not others, so the rate of patients returning for repeat operations can be compared. The hope is that it will ultimately help surgeons identify cancerous and healthy tissue to ensure that all the cancer is removed, and reduce the risk of recurrence and repeat surgery.