Can zapping my brain with electricity make me think faster?

It sounds incredible, but companies are marketing gadgets to pass an electric current directly through your brain supposedly to make you think faster. It’s based on a medical technique called Transcranial Direct Current Stimulation (tDCS) – and Michael Mosley (of course) felt he had to go and try it to see what it really does. 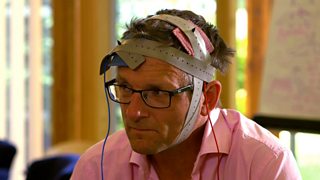 At the University of Oxford, Dr Charlotte Stagg gave Michael a reaction time test before and after passing a tiny direct electrical current through the motor area of his brain. He showed a typical 10% improvement in his reaction times as a result. It’s an effect which lasts for about an hour, and if applied to different parts of the brain can have different effects. Charlotte’s group is working with stroke patients to help them recover their motor control.

tDCS works by changing the voltage in nerve cells, making them slightly more prone to firing when they receive a signal. The effects after the current has been switched off appear to be caused by chemical changes in receptor molecules as a result of the stimulation. Researchers have shown boosts in learning and memory as well as reaction times – all of which have caused huge media interest.

Potential use of tDCS in healthy people, however, is controversial. Certainly experts strongly warn against trying it at home – there is not enough known about its potential effects in the developing brains of children and teenagers, or those who might be susceptible to epilepsy etc.