Addictions are a common, and often devastating problem. But there's a very exciting new area of research which may hold the key to a whole new way of treating them: by erasing or altering our memories. The idea sounds like science fiction, but it does seem to work. 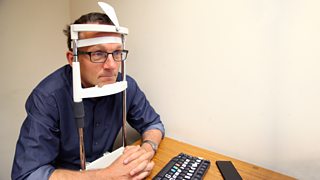 Part of the problem with addictions and cravings is that we all make positive memories or impressions in our brain associated with the things we enjoy. We reinforce these pathways every time we eat some chocolate, take a drag on a cigarette, or have a drink.

But if we could change or erase those memories or associations, we could remove the impulses that drive addiction.

Dr Michael Mosley volunteered to take part in a cutting-edge study in this area at UCL – a research project aiming to help reduce alcohol consumption in heavy drinkers, by replacing ‘positive’ feel-good memories of alcohol with ‘negative’ memories of disgust.

How do memory associations work?

We have evolved to be very good at learning about things we find rewarding, so that we can make them happen again. For example, most people don’t find the taste of beer very nice when they first try it, but because the alcohol it contains causes a pleasant feeling, positive associations with that taste are learned and people come to really enjoy the taste of beer. Those memories then influence our behaviour. This is the basis of a lot of advertising of alcohol. The nice images of cold beer used try to create the urge to drink so that you go and buy a beer. Every time we drink, we’re reinforcing the memory of that association. Often, this doesn’t involve any choice or conscious decision-making - it happens automatically. In addiction this process is hijacked so that these memories trigger really powerful cravings and desires. Once those memories are formed, they’re very hard to resist.

One of reasons there are such high relapse rates after people have been treated for drug use problems is that existing treatments don’t actually do anything to weaken or change those memory associations. Since they’re still there, lying in wait, even when people have been treated and are off drugs they can relapse to high levels of drug taking very quickly when those memories are triggered — they haven't been addressed by the treatment.

Researchers at UCL are looking to find ways of permanently changing these memories so that they don’t automatically trigger cravings anymore. If they can successfully do that, they hope they can put people with drug use problems back in control of drug use and reduce their chance of relapse.

How do you change or erase memories?

When we recall a memory, be it positive or negative, under the right conditions the memory can become unstable for a while, so it can potentially be changed within a certain ‘window of opportunity’. Scientists have now found ways of altering the memory in this window of opportunity – called the reconsolidation window - which is believed to last for about 6 hours.

This is what the researchers at UCL set out to do to Michael – to change his positive memories toward beer.

How did the experiment work?

Over two days, under the instruction of Dr Ravi Das and Dr Sunjeev Kamboj, Michael first had his liking for beer assessed. As part of this, he underwent an eye tracking test in which his liking for alcohol was monitored by how much he looked at pictures of alcohol in comparison to pictures of other things like household items like candles, hairdryers and shoes. Subconsciously, our eyes make tiny movements whilst roving from one picture to another. The extent to which his eyes were drawn to the beer pictures gave the scientists a measure of how much he wanted alcohol. People’s eyes are literally drawn to pictures they find attractive. 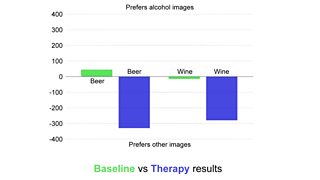 Michael’s eyes were drawn considerably less towards pictures of alcohol after the experiment (blue) than before (green).

Michael then had his positive memories of alcohol brought to mind so that these memories could potentially be changed.

To do this the scientists put a beer in front of Michael while he rated some pictures of beer for how pleasant they were. This meant he needed to use his existing memory associations to make these ratings, which reactivated them. In addition the scientists asked him to think of times in the past when he had wanted to drink to help that reactivation process along.

What’s revolutionary about recalling a memory is that psychologists have discovered it’s possible to actually alter a memory once it’s reactivated in this way. And this is what the scientists attempted to do next. To change Michael’s positive memories of beer into negative ones, the scientists paired lovely pictures of alcohol with unpleasant images that made him feel disgust. Disgust is an emotion that makes people not want to consume food or drink. To further enforce this feeling of disgust, Michael was also asked to drink 8 glasses of water adulterated with the most bitter taste known to man – which everyone finds disgusting! After that little bit of torture, the first day's experiments were over.

A couple of days later Michael was back to have his liking for beer assessed in the same way as it was at the start.

Was Michael’s liking for beer reduced?

The eye tracking data showed that Michael started off the experiment by looking at pictures of beer and of household items for around the same amount of time. 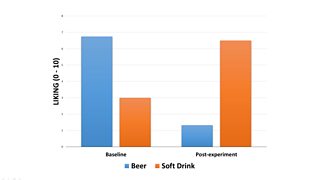 Before the experiment – baseline – Michael much prefers beer (blue) to soft drinks (orange). After the experiment, his preference is reversed.

After the experiment, he was actively looking away from the pictures of beer.

This change equated to a reduction in looking at the alcohol pictures by over 300%!

These results are startling and chime with the current study the researchers are undertaking at UCL with heavy drinkers.

Although the research is in its infancy, its potential is far reaching. Preliminary research has been carried out in China on changing the memories of drug addicts, with positive results lasting 6 months. Dr Das is currently testing the approach in heavy drinkers and monitoring their drinking over a year.