The One Show NHS Patients Awards

Nominations for The One Show NHS Patients Awards are now closed.

Nominations for The One Show NHS Patients Awards are now closed.

What are The One Show NHS Patients Awards?

As the NHS marks its 70th anniversary The One Show, together with the Patients Association, is saying ‘thank you’ to the brilliant people who keep it going day after day.

We are inviting patients and their families from all over the UK to nominate people currently working in the NHS in all health professions who have gone the extra mile to look after them, or done something even more exceptional. In some categories (where specified) we are also accepting nominations from colleagues. You can put forward individuals in as many categories as you like. Entries must be received by midnight Thursday 5th April.

This category is open to anyone currently working for the NHS treating or caring for patients under the age of 18. If you are a young person who has been treated by the NHS or their parent or carer this is your chance to say “thank you” to someone who looked after you. We are looking for those individuals whose care really stood out. If you are under 18 please ask a parent or guardian to make the nomination on your behalf.

This category is open to doctors and consultants of all specialities including GPs and anaesthetists, paramedics, allied health professionals, healthcare scientists and pharmacists currently working for the NHS. If they have treated you or a member of your family please tell us why you would like us to honour them. We are looking for inspirational stories of outstanding treatment or care

This category is open to nurses including district nurses and midwives currently working for the NHS. If they have treated or cared for you or a member of your family and you’d like to thank them please tell us why. We are looking for exceptional individuals who have gone above and beyond their normal day-to-day duties to have a positive impact on patients’ care.

We are looking to celebrate the work of someone special who has dedicated much of their working life to the NHS in whatever capacity, medical or non-medical and deserves wider recognition. If they have cared for you or your family or you work with them please tell us about them so we can honour their contribution. For this category we will also consider nominees who’ve recently retired.

This is the category for the army of support staff who keep the NHS running but don’t always get noticed. They might be porters, drivers, receptionists, lab workers, they may be NHS employees (or volunteers who give up their time for free). We are looking for individuals who go beyond the call of duty to really make a difference. You can nominate them if you are a patient or a colleague.

• SELECTION PROCESS: This isn’t about ranking people above each other; it’s about finding people who are representative of the range and amazing inspirational work that happens all across the NHS. All entries will be considered by our team of researchers and nominations will be selected to go before a panel of judges in each category based on their suitability and the information supplied by the nominee. The panel which will include a representative from the Patients Association, will then shortlist those nominations and select a winner in four of the categories. The makeup of the panel will be announced at a later date.

• AWARD CEREMONY: The winners of the first four categories will be revealed in a special edition of The One Show. Viewers will also be able to vote for the winner of the Unsung Hero Award during the show from a shortlist of three and the winner will be revealed at the end of the show.

Thank you for taking part, please ensure you read through the category criteria above and questions on the form carefully before submitting your nomination.

The One Show NHS Patients Awards Terms and Conditions 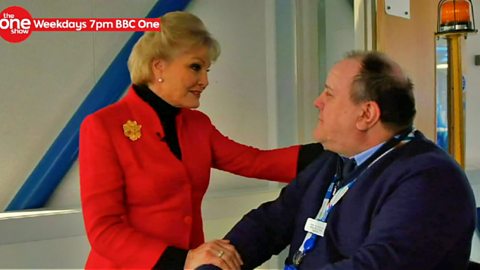 The One Show NHS Patients Awards

To celebrate the NHS turning 70 we are giving you the chance to say 'thank you'...