6 undeniable truths about Nick Cave… according to Nick Cave

Nick Cave is many things. From his noisy beginnings with The Birthday Party, via murderous melodies spun for The Bad Seeds, to the twisted rock’n’roll he has created at the helm of Grinderman – not to forget the soundtracks, novels and films he's written – the apocalyptic crooner has been a hard man to pin down.

But if there’s anyone who can uncover some truths about the shape-shifting piano-player then it’s the artist himself.

In celebration of the indie icon, 6 Music is broadcasting Nick Cave's Idiot Prayer - Alone At Alexandra Palace, which saw the star performing alone in concert during lockdown.

We are also treating you to some great classic Nick Cave content as part of our Nick Cave Artist Collection, including:

First though, let's get to know Cave a bit better with these 6 truths about the legendary musician right from his own mouth… 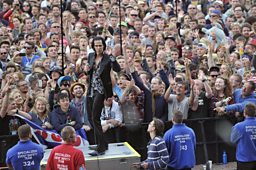 If you find Cave's onstage and on record persona a bit devilish… well good, that’s what he’s aiming for.

With the internet you have everybody making music. I’m not sure that’s such a good thing
Nick Cave

“I think that the function of a rock star was at least – but perhaps not as much these days – to be monstrous and to be godlike at the same time,” he muses.

“In that way people are on an upward motion, people were looking upward. That notion has largely flat-lined these days, with the internet you have everybody making music and making art. I’m not sure that’s such a good thing.”

The suits look good, the voice adds gravitas but underneath it all Nick Cave says he’s just an overgrown adolescent (an extremely articulate one, if we may say so).

In rock, you’re trapped in a regressive adolescent thing that never kind of lets you go
Nick Cave

“I think if you’re in the rock world, no matter how hard you try, you’re trapped in a regressive adolescent thing that never kind of lets you go. That’s what rock music is really about,” he suggests.

“You try to approach adult themes and you try to write for people the same age as you, so in doing that I’m often looking at marriage and other un-rock’n’roll things, but at the end of the day there is an adolescent feel about the whole thing.

“After all, you’re going to the studio with a bunch of mates and making a racket. I love that.”

3. He couldn’t sound happy even if he wanted to

“I was born like this, I had no choice, I was born with the gift of a golden voice,” sung Cave’s hero Leonard Cohen on the 'Tower Of Song'. Well Nick Cave has a gift too… his is just a bit more doom laden.

He’s been called gothic and the like, but the singer insists it's not entirely his fault that his albums showcase a dark side.

“I seem to have been damned to have a melancholic voice,” Cave suggests.

“No matter how much we tweak it in the studio, there’s no little knob that can get rid of it - yet. Maybe one day we’ll be able to make me sound happy on a record, or content or something like that.”

4. You can take the boy out of Australia, but you can’t take Australia out of the man

Despite leaving Australia early in his career – after The Birthday Party had “juiced the country of every person who would be willing to listen to our music” – and living in various cities around the globe, as he’s got older Nick Cave has not only come to terms with being an Australian, but believes that his status as an itinerant Aussie actually inspires his work.

“I consider myself to be Australian. I possibly thought I was stateless at some points in my career but the older I get, the more I understand I’m Australian to the core and it affects everything that I do,” he explains.

“It affects my relationship with the places I live in enormously, especially England where an Australian feels absolutely alienated because we are different, fundamentally different to English people. I think the way that I write, the notion of telling stories, the sense of humour, this is all Australian stuff.”

5. Even Nick Cave has to toil

Don’t let the stream of vivid narratives and seemingly effortless cool fool you, Nick Cave candidly admits that being a god-like, monstrous rock star is a tough job, and you’ve got to put the hours in.

“I don’t care about inspiration,” he declares.

“I go to the office every day and I work. Sometimes things come and sometimes they don’t.”

With 20 plus albums under his belt, the graft is certainly paying off.

6. Grinderman and The Bad Seeds are fundamentally different projects

And no it’s not the ‘tache. They might have similar – if not identical at times – memberships, but there’s a world of difference between Nick Cave And The Bad Seeds, and the two Grinderman albums, declares Cave (frontman of both bands).

The Bad Seeds loved it. My mother liked it. It was a no brainer!
Nick Cave

“The process of making a Grinderman record and a Bad Seeds record is very different,” he advises.

“With a Bad Seeds record there’s at least three months of me sitting in an office on my own writing songs. Then I take them, give them to The Bad Seeds and we record them. With Grinderman we go in [to the studio] for five days together and we write songs from the ground up as a unit. That process is more enjoyable to do because I don’t have as much responsibility going on. I love to sit there and write songs for the Bad Seeds, this is just another way.”

He adds: “It’s a parallel project. It has had such a positive impact on pretty much every aspect of my creative life. The Bad Seeds loved it – it gave them license to make a bit of a racket again – my mother liked it. It was a no brainer! There is a real joyfulness in the studio. There’s also a threatening, malign vein that runs through Grinderman as well. It’s all things to all men and women.”