Are shakes the future of healthy food?

Should I drink meal replacement shakes? 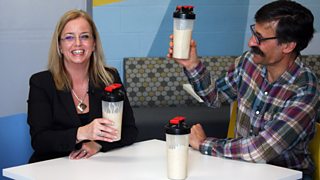 Huel claims to be the market leader in a new generation of meal replacement shakes. It is a liquid food which claims to provide complete nutrition – all the carbohydrates, protein, fats, fibre and essential vitamins and minerals your body needs. Its creators claim they are one of the fastest growing companies in the UK.

Huel’s main ingredients are oats, peas, rice, flaxseeds and coconut and it is sold on the promise that it could save you time and money, and help you lose weight.

But how healthy is it, really?

Before the diet started, Alain had his weight and body composition measured, along with the levels of glucose, fat and cholesterol in his blood.

Bernadette then gave him a breakfast that was as close a match for Huel as possible: the same number of calories, and the same balance of carbohydrates, protein and fat, but all in the form of solid food. After eating the breakfast of toast, smoked salmon, spinach, egg, yogurt, fruit and nuts, Alain was next put under a machine known as ‘the hood’, which analysed the amount of oxygen and carbon dioxide in his breath to measure how fast his body was burning calories. Alain was also asked to rate how hungry or full he felt on a scale of 0-100 for three hours after the breakfast.

He was then sent home to eat his normal diet for three days, during which he did a ‘finger-prick test’ before and after meals to monitor his blood glucose, blood fat and cholesterol levels.

At the end of his 10 days of drinking Huel, Alain returned to Leeds, where Bernadette and her team repeated all the tests to measure the same markers of his health.

They discovered that Alain had lost 1.6kg in weight. They also found that his blood fat levels were lower on the Huel diet. This may have been due to him consuming fewer calories and less fat.

There were no significant differences in his glucose and cholesterol levels.

The results from under ‘the hood’ showed that when Alain ate the solid breakfast at the start of the experiment his energy expenditure rose and then remained fairly steady, indicating that energy was being released from his meal in a slow and steady way.

However, after drinking Huel, his energy expenditure increased quite rapidly but declined faster, suggesting a quick release of energy that did not sustain over the period. The fullness questionnaires Alain completed after meals also showed that he felt hungrier more quickly after a Huel meal than a solid meal.

Bernadette’s analysis of the nutritional content of Huel suggests that it does provide the essential vitamins and minerals you need. However, neither she nor the manufacturers themselves recommend you switch entirely to Huel.

They told us that the product is designed to replace meals when you’re on the go, and they still encourage users to enjoy home-cooked meals.

They also said that as hunger is a complex mechanism, it’s difficult to measure what causes individuals to feel more or less hungry – stressing that Huel does provide complete nutrition.

But Alain told us he will not be rushing to mix up another shake any time soon. He missed the social aspects of eating a meal with other people, as well as the pleasure in preparing and eating food – which can bring important psychological benefits.