Everything you never knew about Roman gladiators

Greg Jenner makes history fun and entertaining, especially on the TV show Horrible Histories and his You’re Dead To Me podcast. Now he has a new show called Homeschool History to help us learn things while stuck at home. This week he’s grabbing a great big cotton bud thing, calling himself “Wolf” and boldly entering the arena to have a good look at gladiators – Roman gladiators to be exact… 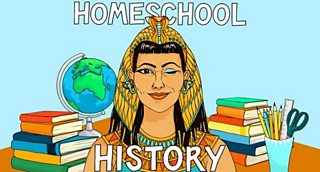 They started as funeral entertainment

The first reports of gladiators (the name comes from the type of sword they used: the gladius) appears around 264BCE, 2300 years ago, back when Rome was still a republic and didn’t have an Emperor in charge. Back then rich Romans would try to make themselves seem more important by throwing elaborate funerals for important people. And part of the entertainment at these funerals was violent fights to the death using sword-wielding combatants called gladiators. 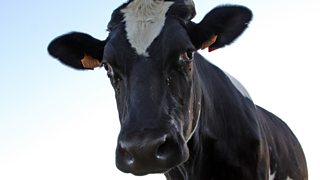 What you wore depended on where you came from

In the early days, most gladiators were prisoners or enslaved people from places that Rome was fighting wars with. And what you wore when you fought in a gladiator contest depended on where you came from. There were three main sorts: Samnites (from Italy), Gauls (from France) and Thracians (from what is now Bulgaria). And they hadn’t quite made it to arenas yet. Those original funeral fights usually took place in Rome’s cattle market. Let’s hope they avoided a pat on the head.

They were the pop stars of their day

Once the republic ended and Emperors started to be in charge of Rome, starting in 27BCE, they saw how popular gladiators were becoming and took charge of organising gladiator battles, making them entertainment for the masses, rather than for funerals.

Soon gladiators became more professional, and people volunteered to fight as it provided good food, a place to live and – if you survived – fame.

Gladiators were immensely popular. Many portraits and images of the fighters still survive and graffiti about gladiators was found on the walls of Pompeii. 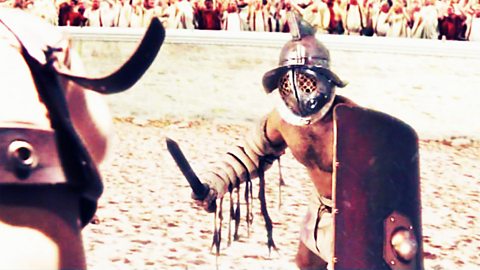 Who were the real Roman gladiators?

A clip from Homeschool History

They had a pretty strange nickname

The gladiators lived in special schools where they trained for their upcoming combat. They had very little control over what they were allowed to do or where they could go. Even their love lives were strictly controlled. And they were kept in separate rooms by their masters to stop them planning any escapes, if they’d had enough of the gladiator life.

To get ready for their epic battles, rather than red meat or raw veg, they would “carb up” with large amounts of barley, which led to them being known as The Barley Boys.

They were second class citizens

Despite the fame and notoriety attached to gladiators, they were still considered to be lowly types, and Roman citizens of good standing wouldn’t want their sons or daughters becoming one. In Roman law they were known as Infames – which meant they were excluded from the rights of other Roman citizens and couldn’t vote or have a will.

Even if a gladiator won or bought his freedom, he would still be considered an Infamis. Which doesn’t seem very fair. To protect themselves, gladiators formed a close-knit brotherhood and would club together to pay for the funerals of fallen comrades.

They didn’t always fight to the death 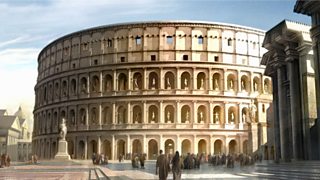 The Colosseum in Rome: History's most famous amphitheatre

The amphitheatre could be flooded with water to stage mock naval battles.

After feeding gladiators all that barley, plus housing and training them for months or even years, the trainers were reluctant to then have them all slaughtered during the course of a single afternoon. So most contests were not to the death. As long as the combatants were brave and entertaining, that was usually enough for the crowd.

Sometimes a special to-the-death gladiator battle would be planned, which ticket holders would be informed of in advance. Across the Roman Empire around 8000 people died in the arena every year.

It was a full day

Gladiator battles were held at huge venues called amphitheatres. “Arena”, the word we use for this type of building today, actually referred to the floor of the amphitheatre that was covered in sand to soak up all the spilt blood.

The crowds weren’t just offered sword-fighting. The day would start with men, called venatores, fighting wild animals such as bears and lions. Then there would be public executions of criminals at noon, with the gladiator battles taking place in the afternoon.

Trapdoors in the arena floor allowed the fighters to make dramatic entrances as the battle began. The amphitheatre could even be flooded with water to stage mock naval battles.

Some fought with fishing nets

As the popularity of gladiator battles grew, new varieties of warrior emerged. No longer did they dress according to where they came from. Now gladiators were identified by the sorts of armour and weapon they carried.

Murmillos brandished a sword, a shield, leg protectors and a long, grilled helmet. Secutors wore a huge helmet, a big sword and a massive shield. The hoplomachus were armed to resemble a Greek hoplite, carrying a spear and a round shield. Thraex gladiators had lighter armour and were more nimble, while a retiarius carried a trident and a fishing net, in order to ensnare the more heavily armoured and less mobile gladiators. There were also andabatae or blindfolded fighters, and gladiatrices or female gladiators.

The Emperor would sometimes have a go

Inside the amphitheatre, the seating arrangements were designated by class. The rich people had the nicest seats, while the less rich people had to stand at the back and try to enjoy snacks such as roast dormouse. The best seat in the house, unsurprisingly, was reserved for the Emperor. He had a royal box containing a bisellium or special sofa where he could have a bit of a lie down if it all got too much for him.

Emperors didn’t select who lived or died depending on which way their thumb was pointing. That’s just a myth.

Some Emperors, including Caligula and Hadrian, would actually enter the arena and fight, though these were staged battles using wooden weapons and the Emperor always won. Of course.

Emperors didn’t select who lived or died depending on which way their thumb was pointing. That’s just a myth.

People would buy their… um… scrapings

Gladiators had fanatical followers, though sometimes this fandom might have gone slightly too far. Rich women would pay to have the sweat and muck scraped from a fighter’s body after battle, which they would use as a fancy moisturiser. Which, let’s face it, is a bit weird.

As the Roman Empire adopted Christianity, the popularity of gladiators decreased. You can’t really “love thy neighbor” if you’re trying to throw a big net over them and then stab them with a trident. But gladiators had an amazingly long run, with the sport lasting around 600 years. There’s no record of how many dormice were consumed during that time.