Is eating carbs in the evening bad for you?

Evidence from dietary studies suggests that regularly eating large quantities of carbohydrate is bad for your waistline and for your blood sugar control. 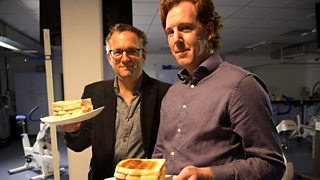 The carbohydrates and sugars in your food end up as glucose in the blood, which is used for energy. If you have more glucose than you need, your body has to work harder to remove the excess from your blood. If this happens regularly, it can lead to serious health problems such as Type 2 diabetes.

It is widely believed that eating carbs in the evening is worse than having them for breakfast. This is because our bodies are thought to be generally more efficient at processing carbs in the morning. It is therefore claimed that it should be better to get your carbs in first thing in the morning, when your body is raring to go, rather than last thing at night when your body is preparing to sleep.

But is this true?

After eating any meal containing carbs, the level of glucose in the bloodstream will rise. In a healthy person who is processing carbs efficiently, that peak will remain within healthy limits and soon return to a baseline. In a person who is not processing carbs efficiently, blood glucose will rise higher and take longer to return to normal. This is a less healthy response. 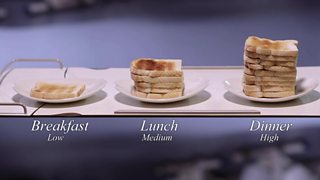 Therefore, measuring a person’s blood glucose response following a meal can reveal how well their body is processing that meal. Generally, the higher the peak of blood glucose or the longer it takes to return to normal, the less healthy the body’s response.

Trust Me wanted to find out if eating carbs in the evening is less healthy than eating them in the morning. So we teamed up with Dr Adam Collins from the University of Surrey to carry out a small-scale pilot study.

We recruited 4 volunteers to help us compare how our bodies cope with eating most of our carbs in the morning, or in the evening. The aim was not to see what happens after a single high carb meal, but to assess whether our group’s ability to keep their blood sugar in check was affected by what time of day they ate a fixed amount of carbs over a period of several days.

For ten days, our volunteers ate a fixed amount of carbs. They were allocated at random two possible meal patterns to follow for two 5 day periods:

After the first 5 day period, the volunteers’ blood glucose profiles were monitored during a ‘study day’ over which they ate the same amount of carbs, but this time spread equally over three meals (‘Medium, Medium, Medium’ pattern). Volunteers were fitted with blood glucose monitors throughout the study day, allowing us to take measurements every 5-10 minutes.

For the second 5 day period, the volunteers switched to whichever pattern they had not followed during the first period, and the study day repeated at the end of this period, as before.

After the first study day, the volunteers had a 5-day ‘washout period’ during which they ate normally.

The experimental design is represented below:

By comparing the volunteers’ blood glucose profiles from Study Day 2 with those measured on Study Day 3, we wanted to find out whether the body’s ability to deal with carbs had changed as a result of following each 5 day meal pattern.

The blood glucose profiles for each participant on Study Days 2 and 3 were plotted, resulting in graphs of the type exemplified below (result for one participant only is shown below, as an illustration): 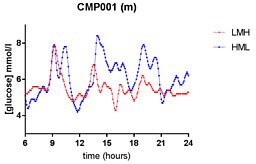 The area under each curve was calculated to give an overall figure for total blood glucose, for each participant, for each Study Day.

The combined data for all participants is shown below:

The results show that when the participants followed the high carb breakfast and the low carb dinner pattern (HML), their blood glucose response was 15.9 units. This level, after 5 days of high carb breakfasts, was roughly as expected for a healthy person.

However, when they followed the low carb breakfast and the high carb dinner pattern (LMH) their blood glucose response was lower, at 10.4 units.

This suggests that, for our volunteers, eating carbs in the evening did not have the adverse effect on blood glucose levels that might have been expected.

This rather surprising result could be explained because our bodies are inherently good at processing carbs in the morning. This means that when the group followed the high carb breakfast (HML) pattern, with peak carbohydrate intake in the morning, they were not able to significantly improve their blood glucose response - as their bodies were already efficiently processing the carbs they were eating.

But our results suggest that the high carb dinner pattern (LMH) trained our volunteers’ bodies to become better at processing carbs in the evening. What is particularly interesting is that this change occurred after only 5 days of following that regime.

Our test is a pilot for a much larger study that Dr Collins is launching, but it suggests that our bodies are better than we thought at adapting to eating carbs in the evening.

Importantly, this is contingent on keeping total daily carbohydrate intake within healthy limits. So you needn’t worry too much about what time of day you eat carbs, as long as you don’t eat too many. If you’ve had a pile of toast for breakfast, try and avoid pasta that night.

Our results also suggest that as our bodies seem to adapt to eating carbs at a particular time of day in order to keep blood sugar in check, it may be healthier to stick to one meal pattern, rather than constantly changing the time of day you have your carbs.