The Romans characterised ancient Britons as 'barbarians', and even built Hadrian’s Wall to keep them out. But a new find, a beautiful Celtic brooch, points to a sophisticated culture. DR ELEANOR BARRACLOUGH goes In Search of the Celts and reconsiders how the two peoples intermingled.

It was was found in a ditch within the Roman fort of Vindolanda, near Hadrian's Wall, alongside the remains of ancient Britons who appeared to have died violent deaths at the hands of their Roman neighbours. The tiny, solid silver brooch of native British design was to prove a source of huge excitement among historians.

Shaped like a bird - probably a duck - this new discovery, from the third century and during the Roman occupation, had stories to tell. The brooch, likely a symbol of honesty, simplicity and resourcefulness, would fill in some crucial details about our understanding of the Ancient British people often known as the Celts - and contradict many ideas about their relationship with the Romans.

Ancient British culture was dismissed as barbarian and violent by the Romans, and it is very hard for us to tell what it was really like, because its traces were largely scrubbed out by the occupation - so this is an incredibly rare glimpse into life in Britain before the Romans came. Far from being barbarian, it suggests a society that was vibrant and sophisticated and able to produce great art.

But what the evidence also suggests is that the brooch could have been worn by either a Briton - or a Roman adopting British design. To a Roman wearer, the image of a migratory bird was a symbol of change and movement - constant features of Roman military life.

The lines between Briton and Roman cultural identity may have been surprisingly blurred.

To native Britons brought up with this artistic tradition, its open latticework and abstract patterning were a recognisable artistic style. Whether Roman or Briton, the wearer of such an item would be making a discreetly stylish statement about the cultural context in which they lived – not one of separation and division, but of connection and mutual influences.

Life on the borderlands seems to have been a mixed affair, where the lines between Briton and Roman cultural identity may have been surprisingly blurred.

Native British or Celtic art survived, even flourished, in Roman Britain. Another great example of this at Vindolanda is a dragonesque brooch with sinuous, almost fishlike curves and tiny squares of coloured enamel stamped into the body.

This development took artistic influences from both Rome and Britain to create a distinctive cultural identity in the borderlands.

Decorative yet functional, brooches like this were used to fasten cloaks together with sturdy pins. With their hugely popular and rather gaudy enamel designs, they were much more commonly found in this military zone than further South.

This suggests that the dragonesque brooch is an important development in the Romano-British art form, and one that took artistic influences from both Rome and Britain to create a distinctive cultural identity in the borderlands. 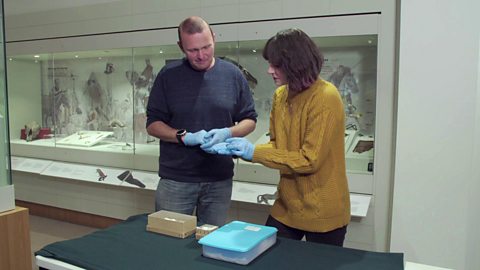 In this clip from In Search of the Celts, Eleanor gets the expert view of Dr. Andrew Birley, Director of Excavations at Vindolanda.

Hadrian’s Wall was far from an impassable barrier in the landscape, keeping cultures and identities apart. It was part of a broader contact zone where humans from different backgrounds would come together, sometimes to visit violence upon each other, sometimes to get on with their lives in peace.

Some Britons may have traded with and certainly mixed with the Romans, who in turn adopted aspects of the indigenous culture. Thanks to these tiny artefacts hidden in the soil for almost 2,000 years, the story emerging here seems to be far more complex, nuanced, and colourful than we once believed.