By Orla Doherty, Producer of The Deep 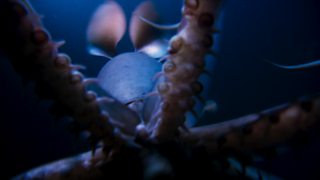 One of the most infamous creatures of the abyss is the Humboldt squid. For The Deep episode, we wanted to spend time with these animals in THEIR world – the depths of the Twilight Zone, between 200 and 1,000 metres beneath the surface. Mauricio Handler and Fernando Luchsinger told us of vast hordes of Humboldt squid gathering in the current after which they were named – the Humboldt current off the coast of Chile. Joe Treddenick, our researcher, went out to investigate.

Conditions were tough – rough seas in the vast open ocean, miles offshore, in the middle of the night with ripping currents. But, after a few nights of dangling remote cameras into the ocean, the results were conclusive – the squid were there, approaching the surface at night, and in their hundreds. These squid had lanternfish in their stomachs – small fish that hide out in the gloom of the Twilight Zone – yet one of the most abundant fish in the ocean.

A year and a half later, we launched an expedition on the scientific research vessel M/V Alucia. On board were its two submersibles, ‘Nadir’ and 'Deep Rover’, both capable of reaching 1,000 metres. 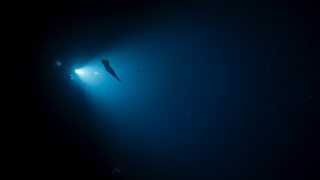 But also on board were some secret weapons to maximise our chances of success. Deep sea scientist Edie Widder who had been part of the science team to track down and film the first ever images of the giant squid from this very ship. Her ingenious invention, the e-jelly, which mimics the bioluminescent distress signal of a deep-sea jellyfish that is under attack, thereby enticing Humboldt squid towards it. Also onboard was Vincent Pieribone, Head of Science for the Dalio Ocean Initiative; his custom-built dimmable red and white LED lights; and a state-of-the-art low-light camera, with which we hoped to be able to film the Humboldts with minimal disturbance. We were applying the same technique used to film lions hunting on the African plains at night, only this would all be taking place a thousand metres beneath the waves where there is ZERO light.

On day one, within half an hour of reaching a depth of 950 metres, we found Humboldt squid. This was without looking. Our luck, it seemed, was in. But it was not to last. What followed was eight days of entrapment on board a ship with no possibility of launching the submersibles… frustrating, to say the least.

Day nine – our second dive. When we got into the depths, we were surrounded by squadrons of squid in full hunting mode. Cameraman Hugh Miller went to work with the low-light camera which could effectively see in the dark, capturing imagery of Humboldts on the hunt in the Twilight Zone – something never filmed before. I was trying to spot the action in the darkness around us, to give Hugh and the pilot warning of where to line up the sub and the cameras. But the speed of these animals was both spell-binding and frustrating, making it impossible to pre-empt their moves. 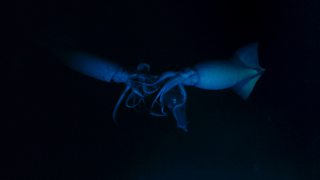 Eventually, after repeated dives in their world, we captured behaviours never seen, let alone filmed before, including a basket-feeding in which a squid used its arms to scoop krill towards its mouth; a formation-descent behaviour in which hundreds of squid simultaneously folded their wings into their body and dropped like dive-bombers; and a tug-of-war over a smaller squid. Cannibalism in Humboldt squid is a well-known phenomenon – but it has never been filmed. Here, at 800 metres, we watched, with our mouths open and cameras rolling, as two large squid fought over a smaller, unlucky one.

In an extraordinary collaboration with scientists and field researchers spanning two years, we captured these exquisite animals in their world, unearthing another secret of the deep ocean.