Learn more about the key players in A Very English Scandal based on true events. Contains plot spoilers.

MP for North Devon and leader of the Liberal Party between 1967-1976. Thorpe was a highly-charismatic Etonian, known for his reforming principals and ebullient charm. In May 1979 he was tried at the Old Bailey on charges of conspiracy and incitement to murder, arising from an earlier clandestine relationship with Norman Scott, which Thorpe wished to keep secret. The case and media furore surrounding it effectively ended his political career.

An accomplished horseman and one-time model, Scott had a clandestine relationship with MP Jeremy Thorpe in the early 60’s, at a time when homosexuality was illegal in Britain. It was during this time that Thorpe was said to have promised to help Scott get a new National Insurance Card, which was never forthcoming - a fact which was to plague both men for years to come.

A fellow Liberal MP and friend of Thorpe’s. After losing his seat for Bodmin in 1970 he moved into business, before retreating to a beach town in California in 1974 for a new life. His friendship with Thorpe returned to haunt him, and after Norman Scott made public his relationship with Thorpe in 1976, Bessell decided to come clean and tell his side of the story to police and journalists.

Thorpe married Caroline Allpass in 1968 and they had a son together. Caroline Thorpe was tragically killed in a car accident two years into their marriage.

Thorpe married the Countess of Harewood, nee Marion Stein, in 1973. Formidable in front of the press, she defended Thorpe’s reputation throughout his trial and continued to do so for the rest of his life.

Home Secretary for the Conservative Party 1970-1972

Fiona Gore was a Scottish champion powerboat racer and, like her husband, an animal rights activist. She went on to win the Seagrave Trophy in 1980 for being the first woman to achieve 102 miles per hour on water on Lake Windermere.

A merchant banker and assistant treasurer of the Liberal Party, he was best man at Thorpe's wedding to Caroline and loyal to a fault. In 1974 he was tasked with silencing Norman Scott and approached a business acquaintance, John Le Mesurier, who contacted a fruit machine salesman called George Deakin, who found Andrew Newton, Norman Scott’s alleged would-be assassin. Holmes only ever admitted hiring Newton to "frighten" Scott.

Holmes, Le Mesurier and Deakin were co-defendants with Thorpe at his trial in 1979, accused of conspiracy to murder Norman Scott. They were acquitted of all charges.

Pub landlady of the Market Inn in Devon, she employed Norman Scott in 1975 and became a close friend. She was said to be exactly as her surname suggested - a kind and loyal woman.

Married to Scott in 1969, Sue and Norman Scott lived in a cottage in Dorset and had a son together, but separated a short while later. 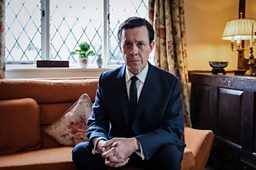 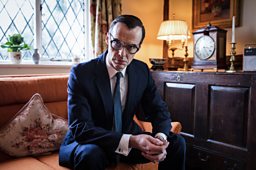 Thorpe's barrister at his trial, known for his colourful one-liners and ruthless cross-examination. Despite a reputation for self-destructive drinking and gambling, Carman was one of Britain’s top libel barristers in the 80s and 90s - successfully defending a number of high profile clients.

Baron Hooson QC was a Welsh Liberal and later Liberal Democrat MP. In 1960 he became the youngest ever QC, aged just 35.

Chartered airline pilot, Andrew Newton, was asked to carry out the plot against Norman Scott. On Dartmoor in October 1975, he shot Scott’s dog, a Great Dane named Rinka, and was arrested shortly after. Newton received a two-year sentence for possession of a firearm with intent to endanger life. Despite claiming at his trial that Scott had been blackmailing him and he had shot the dog to frighten him, he later gave evidence for the prosecution at Thorpe’s Old Bailey trial that he had been hired by Thorpe’s middle-men to murder Scott.

Thorpe's mother was a stalwart of the local Conservative Party, who wore a monocle and smoked cigars. She came from a long heritage of fearless women; her mother Lady Norton Griffiths had once ridden a mule across the Andes.

A widow who became Scott's lover after he moved into her property in a small Welsh village. She contacted Emlyn Hooson, a friend of her father’s, to discuss Scott's claims about Thorpe and later accompanied him to the Houses of Parliament where he told his story to David Steel.

The judge presiding over Thorpe's trial, famous for giving what is considered by many commentators to be one of the most biased summing ups in British legal history.

More from A Very English Scandal