Can I find out if I'm getting dementia?

According to new research, 85% of us would want advance warning if we were developing dementia, even though there’s no cure. Dr Alain Gregoire has been investigating new technology that, it’s hoped, may be able to identify hidden warning signs. 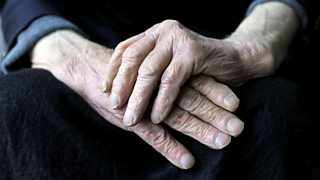 The latest evidence suggests dementia can be present in a patient for up to twenty years before any outward signs become noticeable. Detecting it at an earlier stage could allow patients to access available treatments sooner.

Research has shown that these hidden warning signs can be changes in our sleep, speech, memory and movement. This has led Alzheimer’s Research UK to explore how technology may be able to pick up on these, before individuals are aware of them. One of the most promising approaches is a piece of wearable tech.

To put this to the test, Alain wore an early prototype for a week. It monitored his heart rate, physical activity and sleep patterns – as changes in these are known to be early warning signs. It was also linked to an app on his mobile phone, which encouraged him to video himself doing some simple tasks. These included reciting a variety of phrases, eating, and standing repeatedly from a chair.

Dr Elin Haf Davis works for the company behind the prototype, and she undertook the analysis of Alain’s data. She explained that when Alain recorded himself speaking, they were looking at the quality of his voice, and the volume of his speech. When it comes to eating, they were watching for the co-ordination of the utensils, and to make sure he wasn’t dribbling or drooling. In the standing test, Alain was three seconds slower the second time he did it. Over a period of time, if those three seconds become prolonged, then they would consider that to be important.

It is not possible to draw any conclusions about Alain’s results after just a week. It’s also important to remember that any of these symptoms can happen for many reasons, other than dementia. The idea is that the device will look for combinations of symptoms over a longer period, and if any patterns were concerning, it would alert you to contact your doctor.

To get to the next stage, the team need to develop algorithms that can analyse digital data like this, and indicate potential problems in a reliable and appropriate way. This is expected to take several years of work by doctors, researchers, and programmers. However, it’s a technology that in the future has the potential to allow people more control over their own health, and enable a store of valuable information that could help doctors form a diagnosis.