Giraffemania: When Europe went spotty for the “camelopard” (and other giraffe facts)

As Brett Westwood discovers in Natural Histories, the beloved creature of the African plains became a worldwide sensation as news and sightings of its striking beauty travelled around the world.

The first Europeans to see giraffes thought they were too strange to be of this world and so they developed a mythical status. To them, the animal had the gait and disinterested chew of a camel and the spots of a leopard so they came up with the ingenious name “camelopard”.

The Romans transported the first giraffes to Europe in 46 BC and put them to battle in the Colosseum. It was more than a millennium until the next giraffes were brought to Europe.

“Giraffemania” gripped Europe in 1827 when the viceroy of Egypt gave live specimens to the kings of Britain and France, and the emperor of Austria.

The French giraffe, Zarafa, trekked by foot from Marseille to Paris and generated great excitement in the towns and cities she passed through. In Paris, King Charles X put her on show in the Jardin des Plantes where tens of thousands of people came to see her. Zarafa became the subject of songs, instrumental music, poems, music-hall sketches and items of high fashion. 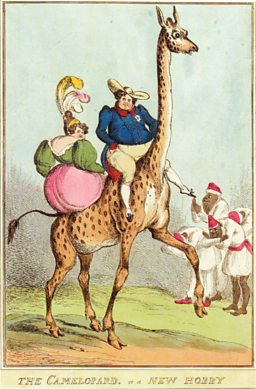 The Camelopard, or A New Hobby (1827) by satirist William Heath showing George IV riding his giraffe with his mistress Lady Conyngham. The animal was actually too weak for this to have happened. © Royal Pavilion & Museums, Brighton & Hove

A hole was reportedly cut in the deck of a trading ship to accommodate King George IV’s giraffe on her voyage to London.

Unfortunately she had been injured in transit and was becoming ill. The doting king spent a large sum of money on a contraption to hoist the giraffe to its feet and political satirists had a field day. Artist William Heath drew a cartoon showing the wheezing giraffe hanging limply from its support with the caption, “I suppose we shall have to pay for stuffing him next.”

The giraffe died soon after, was in fact stuffed, but has now been lost.

Giraffes are so unusual that scientists struggled to categorise them. The tufts which protrude from their heads led people to believe they were in the same family as deer. These horn-like “ossicones” start off as soft cartilage and turn to bone over the course of a giraffe’s life, so adult skulls have what look like two antlers. 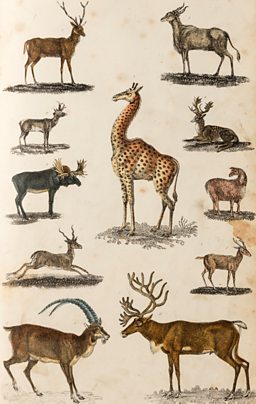 The giraffe’s tufty protrusions were frequently mistaken for horns and for a long time the animal was taxonomically classified as belonging to the genus of deer (cervus). Illustration from Oliver Goldsmith’s History of the Earth and Animated Nature.

Giraffes are the tallest land mammal, largely due to their enormous legs and towering long neck.

The reason for the long neck is still debated but one popular theory relates to the way they fight. When male giraffes duel, they swing their heads like clubs. The longer the neck, the more dominant they become and the more attractive they are to mates.

Poachers are killing record numbers of giraffes because many people believe the animal's meat and bone marrow is a cure for HIV. Giraffe bones and severed heads can fetch astronomical prices.

They are also under threat from some rural African communities for their meat and also as an important source of income. Giraffe skin and hair is used to make clothing and accessories.

Giraffe numbers have fallen by 40% since the 1980s but there has been little conservation work done in comparison to the efforts put in to saving elephants, rhinos and other charismatic mammals.

They have few natural predators and, as the tallest land mammal on safari, their high visibility led people to assume they were doing well. Only recently have they been added to the Red List of endangered species. 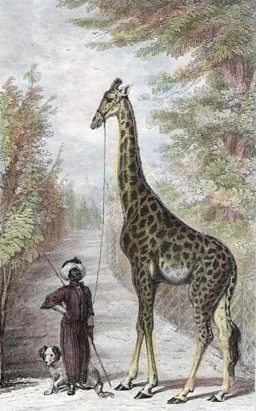 The giraffe given to Charles X of France with its keeper in the Jardin du Roi, Paris (1829). 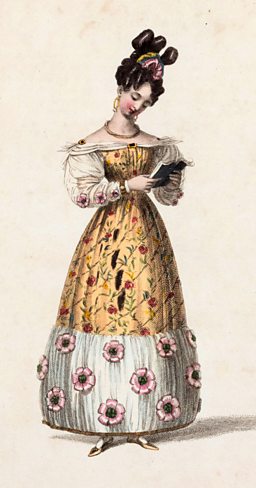 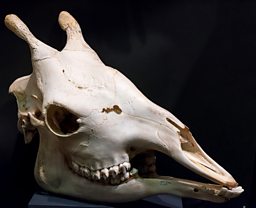