BBC Music’s Sound of 2018 has shone a spotlight on the pop sounds of Scandinavia, with Norway's Sigrid topping the annual poll to find the most exciting new music star on the scene.

Her single Strangers has been on the Radio 1 A-list for several weeks now, so it should be familiar to many listeners, and she performed a truly stunning Live Lounge performance recently to mark her winning the Sound Of poll.

Loving what you’ve heard so far from Sigrid? Here’s a selection of fellow Scandi-singers you need to know...

What? Sigrid is the deserving winner of the BBC Sound Of 2018 poll and celebrated her win with a 10/10 Live Lounge performance of her new single Strangers. 'Smashed it' doesn't even come close with live vocals like this.

She also performed an exceptional cover of Ellie Goulding's Anything Can Happen, a nod to the Sound of 2010 winner.

Sigrid's crisp, bright sound is a perfect showcase for the Scandinavian pop scene, which is bursting with talented young stars who each have a different slant on pop. Here's further listening to keep you entertained until Sigrid drops her debut album later this year. 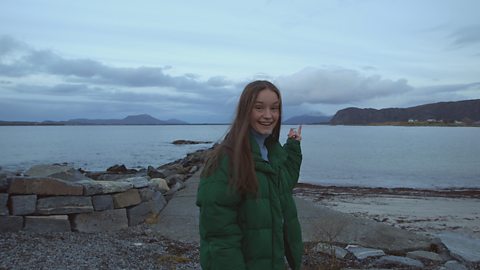 We meet BBC Music Sound of 2018 winner Sigrid in Ålesund, Norway, where she grew up.

Robyn Dancing On My Own video

What? Robyn has arguably et the benchmark for Scandi singers and her unforgettable 2007 hit With Every Heartbeat still gets played on Radio 1, 11 years after it hit No.1.

She hasn't released any solo music since 2010 (there have been several side projects and collaborations in that time), but she’s seen tragi-banger Dancing On My Own covered several times, including Callum Scott’s big weepy ballad in 2016, scoring a bigger hit than Robyn did with the original.

Robyn also scored UK hits with singles Be Mine, Handle Me and Who's That Girl but her back catalogue is held in the highest esteem by lovers of pop music the world over. New music is expected in the not-too-distant future.

What? Tove Lo has been flying the flag for Swedish pop females over the past few years, keeping the charts busy with her brand of forward-thinking, sexually-liberated pop.

Her biggest international hits are Habits (Stay High) and Talking Body from her 2014 album Queen Of The Clouds but a dive into any of her three albums will uncover some proper pop gems (such as her 2016 hit Cool Girl, which she performed in Radio '1's Live Lounge that year).

She's barely slowed down since - releasing new albums in 2016 and 2017 which have been critically acclaimed for both their music and how she speaks about female sexuality.

Who? Anna Of The North

Anna Of The North Someone video

What? Anna Of The North is a low-key master of perfect pop tunes, and although it’s early days, she's already been embraced by the U.S. hip-hop scene.

She is among the guests on Tyler, The Creator's critically acclaimed 2017 album Flower Boy, on tracks which also featured Rex Orange County (he placed second on the Sound Of 2018) and Frank Ocean (he's Frank Ocean). So she's making friends in all the right places.

But her own music is where the magic really happens. Anna Of The North specialises in eighties influenced tracks like Someone and frosty, lovelorn treats such as Oslo.

What? Zara Larsson is already well on her way to pop's A-list, after scoring a string of global hits in 2015 and 2016 such as Lush Life, Never Forget You and Ain't My Fault - all of which were huge on Radio 1's playlist.

Zara became famous in Sweden at 10 years old, when she won Talang, the Swedish version of Britain's Got Talent, and had already scored a string of hits in her homeland by the time she went global. She mixed pop, dance and R&B sounds on her second album (her first global release) So Good, which sold more than 500,000 copies in the U.S. alone.

Zara has also become known for standing up for women's rights on social media, mixing her musical talent with a strong, political mind. She's nailing the popstar thing and smashing the 'role model' part of her job too.

What? Like several other stars on this list, Tove Styrke made her name on a TV talent show in her home country. Tove came third on Swedish Idol in 2009 and since then has been growing her fanbase and reputation as a pop talent to be reckoned with.

Her second album Kiddo, and singles such as Ego and Borderline, made international pop fans sit up and pay attention and her single Say My Name was Greg James' pick for Single Of The Week on his Radio 1 show in early summer 2017.

Hopefully her third album will be gifting us with more pop gems in the not too distant future.

What? You already know MØ - after all, she's the voice of one of the most streamed and biggest selling songs of all time - Major Lazer's Lean On.

Karen Marie Aagaard Ørsted Andersen has worked with Diplo of Major Lazer since her debut album, 2014's No Mythologies To Follow, and the pair recently teamed up for a new track, Get It Right, but it's on her solo work where things really shine.

MØ scored a major hit in 2016 with her single Final Song, but also grabbed attention with singles such as Pilgrim, Kamikaze and When I Was Young - none of which sat prettily in a traditional pop mould and felt all the more exciting for their unique sounds.