Can singing give you a natural high?

Doing anything that we enjoy can make us feel good, but we wanted to investigate, for the first time, whether singing or dancing could trigger a specific feeling of euphoria, known as a ‘natural high’, that could be beneficial for our mental health. 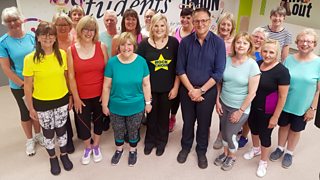 Many runners report a feeling of bliss during and after exercise, and the evidence for this ‘runner’s high’ has been well established in many scientific studies. It’s thought to be caused, at least in part, by the release of a group of feel-good chemicals called endocannabinoids – chemicals that have only recently been discovered. We make them naturally in our bodies, and they have a very similar structure to the feel-good chemicals found in the cannabis plant.

So, is running special? Or are there other activities you can do which will induce similar chemical changes in the brain? There’s emerging evidence that other types of exercise like cycling or rowing at a moderate pace can also induce a ‘natural high’. Other activities that many people say make them feel good are singing and dancing, but scientists have never tested whether these can trigger an increase in endocannabinoids… until now!

We set up a ground-breaking experiment with physiologist Dr Saoirse O’Sullivan at the University of Nottingham, and 9 volunteers from the Derbyshire Rock Choir. The volunteers tried a different activity on four different days: singing, dancing, cycling and a control activity designed to have no effect - reading boiler and dishwasher manuals.

They did each activity for 30 minutes, in the same room at the same time of day. We tested their blood before and after each activity to see if there was any change in their endocannabinoid levels. In addition, they all completed questionnaires to assess how they felt. But would any of the activities give them a measurable natural high?

The control activity - reading boiler and dishwasher manuals - had almost no effect on endocannabinoid levels, just a 7% change, and the activity put the group in a much worse mood.

Cycling – On average, the group’s endocannabinoid levels increased by 19%, but in their questionnaires they didn’t report an improvement in mood.

Dancing – Endocannabinoids went up by 21%, and this time it was accompanied by an improvement in the group’s mood.

Singing – This showed the biggest increase in endocannabinoids of 42%, twice as much as the cycling. It was also linked with an average improvement in mood.

This is just one small study, and our volunteers were people who already liked singing and participated in the activity regularly, which could have played a part in the results. But our experiment shows for the first time that dancing, and especially singing, can have an effect on endocannabinoids.

It’s early days, but because endocannabinoids affect our mood and have been linked with reducing anxiety and stress, we hope that these findings will encourage further research into non-pharmaceutical ways of treating common mental health conditions.