World War One At Home - a digital archive

A digital guide to World War One

World War One is brought to life for the modern digital generation with an interactive BBC ebook looking at what it was like to live on the home front 100 years ago. 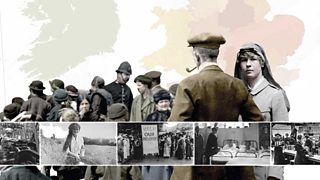 The World War One At Home ebook collects together over 1,300 stories including first-hand accounts and tales of real life across the UK.

With over 100 pages, the ebook features over 200 images and over 40 minutes of audio and video material, curated from the vast archive of the Imperial War Museums, the BBC, local museums and individuals across the UK.

In addition, there are interactive features, which allow the viewer to delve deeper into stories if they choose, and view a series of ‘then and now’ slider images.

This new, digital format allows the reader to browse the material much as they would a beautifully put together coffee table book, with the added advantage that they can watch video and listen to audio too.

Some of the featured interactive stories include:

In 1916, the growing threat from German U-boats led the Admiralty to back a bizarre experiment. It was suggested that sea lions might be trained to detect the underwater sound of a U-boat, then swim to the enemy vessel and signal its location. Initial trials in a swimming pool in Glasgow and then in Lake Bala in Wales were promising. But in the Solent, the experiment failed. Two sea lions were tasked to chase a Royal Navy submarine, but they were easily distracted by other vessels and shoals of fish, and absconded for hours at a time. The experiment was abandoned in the summer of 1917.

The British Army Pigeon Messaging Service was set up on the Kent coast and up to 100,000 pigeons were recruited as messengers, carrying important messages back to the home front about ship manoeuvres in the English Channel and emergency messages when seaplanes went down.

Known for their reliability, pigeons could fly distances of over 100 miles at an average speed of 50mph. So valuable were these winged messengers that fines of £100 were imposed on anyone found wounding or molesting a homing pigeon.

On Jan 1915 German Zeppelin airships travelled across the North Sea towards Britain. Residents all along the Norfolk coast reported hearing an eerie throbbing sound above them, followed by the sound of explosions. In the space of just a few minutes, the seaside town of Great Yarmouth in Norfolk had been hit by ten bombs, killing two people and causing thousands of pounds worth of damage. It was the first of over 50 bombing raids that German airships carried out over Britain.

Later in the war, when technology had developed enough to fight the threat, the first airship, the SL11 was brought down. The Times newspaper recorded it’s falls as “the greatest free show London had ever seen” Tens of thousands of people are on film as they made a pilgrimage, to view the wreckage. Unique eyewitness accounts, photographs and films tell the story of the terror in the skies.

Football was popular with the women who worked and matches could attract thousands of spectators. A gallery of photographs depicts some of the finest teams from the factories.

Among the “munitionettes” were the Blyth Spartans from Croft Park in Newcastle who won the Munitionettes Cup in 1918 in front of a crowd of 22 000 people. Ten thousand people turned out to watch the first competitive match of the Dick, Kerr Ladies FC from Preston on Christmas Day 1917 and the game raised £600, over £38 000 today.

They went on to become an international sensation touring France and the United States. When in 1920 they played the St Helen’s Ladies from Merseyside the crowd numbered 53 000 with another 14 000 locked outside. Many teams folded when the factories and in 1921 the FA banned women’s football matches at their grounds.

People from other places

The collection charts the influx of visitors from across the globe; a new phenomenon for many people unused to travelling widely or encountering people from other countries. Indian and Gurka soldiers were nursed at the Brighton Pavilion.

An estimated 250 000 Belgian refugees sought safe haven in Britain and they were widely dispersed across the country including parts of Wales and Ireland.

Anzac soldiers – usually fitter, bigger and better paid – set hearts a flutter in Weymouth resulting in fifty weddings and by the end of the war over 105 000 ANZACs had stayed and recuperated in the area.

Canadian and American soldiers also came to these shores, and an American servicemen’s centre known as “The Eagle Hut” offered troops home comforts in the capital.

Where to find it

For information about downloading the ebook please click here

The free, downloadable, interactive ebook is compatible for use on iOS, Android and Kindle tablets.

The World War One at Home interactive ebook uses original journalism, digital technology and archival film, sound, images and documents from Imperial War Museums (IWM) to reflect the lives of many people caught up in the conflict, and the many communities from which they came.