Summary: On Remembrance Day we remember all those whose lives have been affected by conflict since World War 1, and those who have died in particular. 11 November 2018 marks one hundred years since the signing of The Armistice, which brought WW1 to an end. This assembly explores 'remembering' and the video clip features a soldier from WW1 recording his experiences in his diary.

Resources: an image of poppies and The Last Post (see 'Key links'). 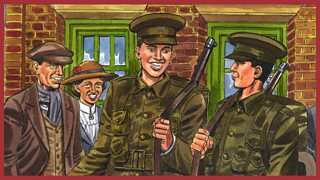 I won't forget a single one of them. Not ever.

September, 1914. Walter Bush records in his diary how he enlists in the army with best friend, Harry Parker, and how they travel to the trenches of the Western Front. Harry is eager for action, but when their turn comes to go 'over the top' Walter is injured by a shell and resumes his diary in a military hospital in England. Once he has recovered it is his painful duty to visit Harry's mother - to tell her what he knows of the circumstances of Harry's death in the same attack. Walter tells Mrs Parker that he was with Harry at the end and that he 'didn't suffer' - though in reality he knows nothing about Harry's death. Walter says he will always remember Harry - and all the others he fought alongside.