What should I not eat or drink when I’m taking medication?

When we take antibiotics, we often wonder whether it’s safe to drink alcohol – but in fact, there are a lot more foods and drinks that we should take care about when we take medication. 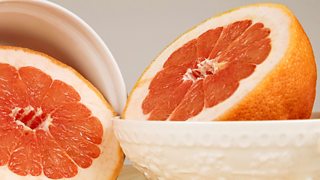 There are so many ways in which what we eat can affect the medicines we take that it is really important always to read the instructions on the packet.

When we take medicines, they are broken down in our gut and then in our livers in the same way as foods do – and the two can affect each other in complex ways, so that some foods can magnify the effects of a drug, and some can stop drugs working – both of which can, of course, be dangerous.

A few examples of common interactions are:

Some drugs such as antihistamines and antidepressants can cause drowsiness, and alcohol can enhance that effect, so you should take special care. On the other hand, many modern antibiotics don’t require abstinence.

However, there is also another effect that drugs can have in combination with alcohol, called ‘alcohol flushing syndrome’ or a ‘disulfiram-like reaction’. When alcohol is broken down in the body, it forms a toxic substance called acetaldehyde which the body then gets rid of. Some drugs, though, can cause acetaldehyde to build up instead, giving symptoms such as flushing, high blood pressure, a racing heart and vomiting.

The list of drugs that interact with alcohol is very extensive, so always check the packet, or ask your pharmacist or GP when you are prescribed medication.

It may sound surprising, but grapefruit interacts with a whole range of medicines in potentially dangerous ways. It was discovered in 1989, when a doctor was studying the effects of alcohol on a particular blood pressure medicine. He used grapefruit juice to disguise the taste of the alcohol – but it turned out that the grapefruit juice itself increased the activity of the blood pressure medication 3-fold! Now it has been discovered to interact with over 100 medicines.

The reason is that grapefruit contains chemical compounds called furanocoumarins. These furanocoumarins block the enzymes which break down drugs in the liver before they reach the ‘main’ blood supply for the body. This means the concentrations in the blood of some medicines can go to dangerously high levels.

Just one grapefruit, or glass of grapefruit juice, can increase the effect of some cholesterol drugs 13 times!

There are far too many drugs that interact with grapefruit to list, but it includes some statins, some medicines for arrhythmia, some anti-psychotic medications, some transplant drugs, some drugs for erectile dysfunction… essentially, always check your medicine packet if you are a fan of grapefruit.

The same furanocoumarins are also present in Seville oranges and pomelos – but not normal oranges (although normal oranges do themselves sometimes affect other medications too!)

Leafy greens such as kale, broccoli, spinach, chard, cabbage – and especially prunes all contain relatively high levels of vitamin K, as can some plant oils. Vitamin K can encourage blood clotting – so if you are on blood thinning drugs such as warfarin, take care as these foods will act against the drug. There has even been one case reported of excessive green tea drinking potentially causing this problem. However, don’t cut greens out of your diet entirely – just try to avoid a big binge of them on one day, giving you a sudden vitamin K boost.

If you are prescribed anti-coagulants or blood thinners, then check with your pharmacist for a full list of foods that you should be careful about.

Black liquorice contains a very sweet-tasting chemical called glycyrrhizin. However, glycyrrhizin can cause potassium levels to plummet, affecting blood pressure and triggering abnormal heart rhythms even in healthy people. If you have blood pressure or heart problems already, avoiding liquorice is very sensible. Some processed ‘liquorice’ sweets are flavoured with anise instead of liquorice, so check the packet if you’re concerned.

Tyramine is an amino acid that helps regulate blood pressure. Our bodies are actually very good at breaking down tyramine, but if you’re on certain meds for depression called MAOI’s (monoamine oxidase inhibitors), then the levels of tyramine in your body can get beyond the point at which the body can process them and blood pressure can rise – causing a fast heart rate, headache, hypertension and possibly stroke. This is perhaps one of the most feared interactions that doctors look out for.

Tyramine is found in a wide range of foods including any yeast extract such as marmite; pickled, cured, smoked or fermented foods like fish and meats, aged smelly cheeses and some alcoholic drinks. Chocolate is often blamed for this interaction as well, as it does contain some tyramine, but the evidence is weak that it is a real culprit.

These are only examples of a few types of food/drug interactions that can occur. Always check your medicine packets, and talk to your pharmacist or GP when taking medicine