Diving with groupers and sharks 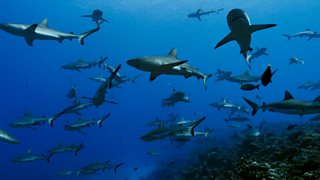 The massive school of sharks here in French Polynesia is one of nature’s biggest spectacles, with up to 700 grey reef sharks living around one small channel that runs through the reef. In many parts of the world shark populations have declined from over-fishing, so its exciting to see them in such huge numbers.

They swim very quietly during the day and are pretty shy if you try to approach them. But by using a re-breather you can silently get close to them without seeing any signs of aggression. And this amazing location is not just about the sharks, there is another spectacle here and this is one that I have been following and filming for the past 15 years – the spawning of the marbled grouper.

Every year, tens of thousands of grouper gather together to mass spawn, sending their eggs and sperm into the water column, so the fertilised eggs are carried away on the current. All of this activity draws in the sharks: it becomes a mass spectacle of spawning grouper and sharks predating on them.

In 2014 I filmed an incredible spawning event in high definition. This filming success was the beginning of my efforts toward building this sequence for the Coral Reefs film for Blue Planet II. But capturing this sequence in its entirety, in order to tell the full story of the grouper, would take more than just one year as the spawning itself is over in a very short time – it is all over in less than an hour. 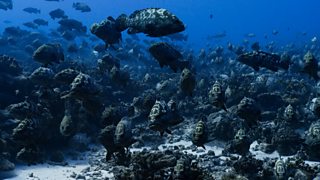 So, I returned in 2015 with my team, also accompanied by BBC’s Assistant Producer, Rachel Butler. This year, as well as filming the grouper during the day, we were also prepared for night filming in case the grouper were to spawn at night. For the night dive, all of the crew wore chain-mail suits in order to protect against a potential shark bite. A dive at night turned out to be exhausting, because of the chain mail. And it was at moments stressful because the action was so powerful, with at times a frenzy of sharks swimming at us. One time the sharks tried to grab the lens of my camera. But I do not believe that it was an ‘attack’ - I think that it was just attracted by the electrical currents surrounding the metal housing.

Over a few weeks on location we filmed the groupers gathering and the males fighting and jostling for position next to a female full of eggs, but nature can be unpredictable and this year - and for every year since - the spawning did not happen as it had for the past 15 years. No one yet knows why the groupers didn’t spawn as before, my observations from years here have shown that normally the grouper spawn during the incoming current on the day of the full moon. It will be years more research before we truly understand if there is a new pattern and if so why? 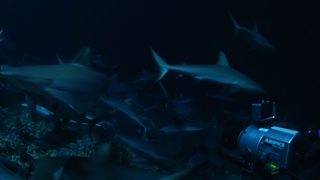 In 2016 I was busy on another assignment a long way from the grouper spawning. Because we already had my footage from the grouper spawning that I captured in 2014 we didn’t go back to the location. Instead another team were there with the goal of filming the spawning in high speed. It takes many years to try and capture such an ambitious sequence as this on film. For me it is the culmination of 15 years, from first discovering this unique location to working out the grouper behaviour to filming it in all its glory in high definition. I am looking forward to continuing to help unravel the grouper spawning now that it is changing and will without doubt be continuing to return to this very special location regularly in the years to come.