About Let It Shine

How the show works

Let It Shine will run for eight weeks from Saturday 7th January to Saturday 25th February 2017 on BBC One. Let It Shine is a new UK wide BBC talent search to find 5 contestants to join the cast of a brand new stage show. They will play the role of a boyband in a new nationwide touring musical that features the music of Take That. Thousands applied, and from discussions between the TV show Producers, vocal coaches and choreographers, a selection of contestants were invited to audition for the chance to win a place in the stage show.

The initial selection criteria was based on vocals, choreography and charisma/personality. Let It Shine will be hosted by Graham Norton and Mel Giedroyc. There are three judges who will appear in every show: Gary Barlow, Dannii Minogue, and Martin Kemp. There is also a fourth guest judge position. For the first four audition shows Amber Riley will be the guest judge. There will be further announcements around the remaining guest judges for the rest of the series in due course. 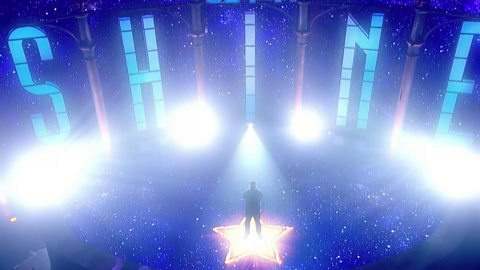 The Let It Shine starway!

The stage show is called “The Band”. The winning 5 contestants will play the part of a pop group in the musical, which features the music of Take That. They do not need to look or sound like the original members of Take That. However they must display the charisma, talent, energy, collective appeal and complementary skills, and have the stamina to play the part of a boyband in a professional touring production in 2017. The stage producers are David Pugh & Dafydd Rogers Limited.

Let It Shine has three parts of contest. The details of these parts are outlined below.

In each audition show each contestant will perform individually in front of the judges Gary Barlow, Dannii Minogue, Martin Kemp, and Amber Riley. Each contestant will sing one song. During this performance the contestant can choose to showcase any relevant skills to try to impress the judges – these could include singing, dancing or playing an instrument, or a combination of them all. After their performance each judge will award a score out of 5, without conferring. The judges will award their scores individually. At the point of deciding their scores each judge will not know how the other judges have scored. The scores will then be added together and the total score is revealed simultaneously to the contestant, judges and the studio audience. The contestant needs 15 or more stars to proceed to the next stage of the contest. The maximum score possible is 20 stars. Between the judges and the contestant lies the Let It Shine ‘starway’. Each point awarded by the judges is revealed on the ‘starway’ as one illuminated star. The boy stands on the 15th star. After the judges have scored, the stars are revealed. If the total score is 15 or more, the star they are standing on lights up (along with any additional stars) and they will go through to the next stage of part one – the Dance Assessment. The judges’ individual scores will be revealed after the total score for each contestant has been revealed.

The 40 boys remaining in the contest will now be put into groups. At this stage there will be 5 groups and each group will consist of 8 contestants. In putting together the groups, the following considerations are taken into account - skills, experience, compatibility and cohesion – to ensure each group has the best chance to showcase what the judges are looking for.

In Show 5 each group will perform and collaborate with an established music artist, and they will perform songs that the guest artists have previously recorded or performed. The choice of which artist would be paired with which band was decided via a random draw. Joining the judging panel is new guest judge for Show 5 – Lulu. After each group’s performance has finished, the judges will leave the studio and go into the separate Deliberation Room. At this point each group has to lose 3 contestants.

The judges have to decide which 5 members of each group should remain in the contest, and which 3 members of each group should now leave Let it Shine. The four judges need to come to a unanimous decision when deliberating on each group. If the judges are not able to come to a unanimous decision, then Gary Barlow as “Head Judge” would make the final decision. At the end of this show there will be 5 bands each consisting of 5 contestants. Details of Shows 6- 8 will be revealed nearer the time.

The five bands consisting of 5 contestants each will now enter the live stages of the contest - Shows 6-8. Viewer voting will start for the first time in Show 6 (Saturday 11th February 2017), when viewers will have the opportunity to vote for their favourite band. For voting information please go to the ‘Voting Info’ page.

In the Results Show the viewers’ decision is revealed. The bands with the highest viewer votes will have a “safe pass” through to the following week (three bands will have a “safe pass” in Show 6 and two bands in Show 7). The two bands with the lowest viewer votes must perform again for the judges. They will each sing a new song each. The bands drew lots for the songs and the individual lines they will sing in the results show. After both bands have performed, these two groups will then be “disbanded”. The 10 contestants are now no longer competing as bands, they are being judged as individuals and fighting for their right to remain in the contest. The judges must pick which 5 contestants to keep in the contest and therefore which 5 will now leave Let it Shine. In the event of deadlock Gary Barlow will act as “Head Judge”.

The judges are then sent off to consider their decision in the separate Deliberation Room. The judges will base their decision on the songs the bottom two bands perform, as well as considering the performance the boys did in the Main show earlier that evening.
Nb. The judges may choose to keep all five boys from one band and no boys from the other band, or they may choose a mixture of the two. If the judges do not choose to keep a band intact to go through to the next week then the band with the majority numbers remaining (3 or more) retain their identity and the new members join them for the next week.

The Live Final will be one main show on Saturday 25th February, there will be no separate results show like Show 6 and Show 7.
The Final will feature the three bands remaining in the competition. These three bands will all perform twice – the first performance is to a musical theatre song, the second performance to a pop ballad.

The judges will comment on all the performances, but once again do not score. The guest judge for the final will be Robbie Williams.
The viewers will then have the opportunity to vote for their favourite band as voting lines will open after all three bands have performed twice.There will be no “disbanding” mechanic in the Final (as happened in Shows 6 & 7), the viewers are voting for the band they want to win the competition. The judges will not be picking the winners. The winning band will be announced by Graham and Mel.
The 5 winning boys win the prize to join the touring musical, “The Band”.