During China’s Cultural Revolution traditional artists were condemned as counter-revolutionaries and imprisoned. In their place the government attempted to create a new visual culture: one that celebrated workers, soldiers, industrial progress and Chairman Mao. 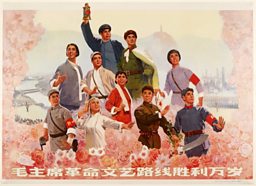 The slogan says "Long live the triumph of Chairman Mao's revolutionary line of literature and art!" and the background shows the town of Yan’an, where Mao Zedong declared that all art and literature should serve politics first and art second | Jiasheng Ding; Shanghai Theatre Academy (est.1945), Characters from the revolutionary operas, 1974

In 1966 Mao Zedong, the Communist leader of China, started a political campaign that became known as the Cultural Revolution (1966-1976). Mao called on China's youth to help him purge capitalist influences and bourgeois thinking in government, teaching, the media and arts, and to reinvigorate the revolutionary spirit.

Calling themselves The Red Guards, radical students set out to destroy the "four olds": old ideas, customs, habits and culture. They spearheaded the interrogation, humiliation and beatings of teachers and intellectuals, and travelled the country destroying cultural heritage.

During the Cultural Revolution traditional artists were condemned as counter-revolutionaries and their work destroyed. A new style of art was required that supported the Maoist line and served the worker, peasant and soldier.

These images permeated all areas of everyday life and were reproduced on all manner of objects including matchboxes, which before had usually shown images from Chinese folklore.

A new travelling exhibition organised by The Ashmolean Museum, University of Oxford explores the art made during the tumultuous decade, and includes propaganda posters, revolutionary landscapes, papercuts and household objects.

The exhibition Cultural Revolution is at William Morris Gallery, 23 February-27 May 2019. All images © Ashmolean Museum, University of Oxford 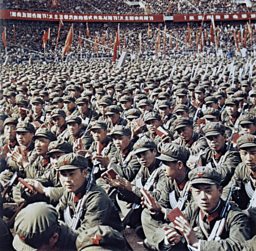 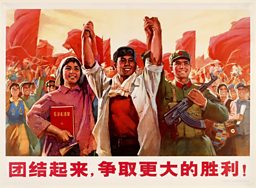 The composition style of many paintings was based on the Soviet model – with strong, central groupings of figures. Here a woman holds Mao's Little Red Book, which was compulsory reading | Yan Yongsheng, Unite for Greater Victory!, 1974 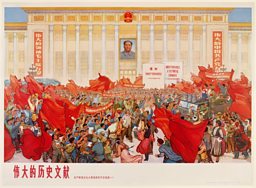 The predominant colour of new artworks was red, the colour of the revolution. A portrait of Chairman Mao takes pride of place on the Great Hall of the People | Cultural Revolution Group Painting Collective, The Great Historical Documents, 1976 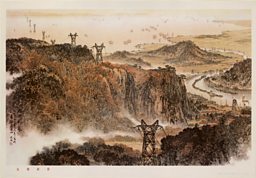 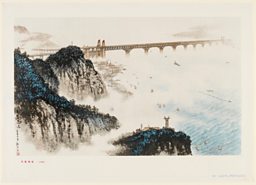 Or this railway bridge crossing a river | Wei Zixi, Heaven’s Moat will become a thoroughfare, 1974 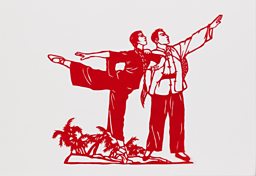 Even the folk art of the papercut, which was used to decorate windows, promoted Mao Zedong Thought. This is a papercut of a ballet about the liberation of a peasant girl in Hainan Island and her rise in the Chinese Communist Party | Unknown, Set of seven papercuts depicting heroines from Red Detachment of Women, 1970s 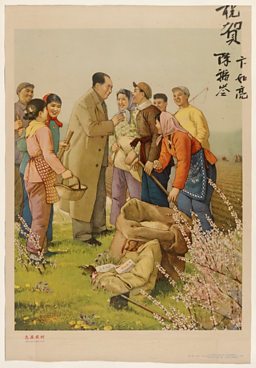 Images of the leader appeared everywhere during the Cultural Revolution. This poster depicts him with a group of educated young people who volunteered to go to the countryside to work as peasants. The inscription reads "their ambition is in the countryside" | Hongcai Zhou, Chairman Mao talking to farmers in a spring landscape, 1964 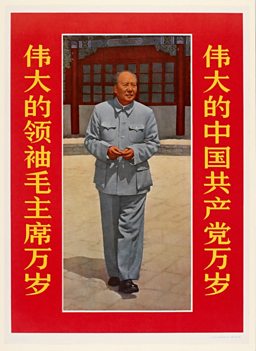 More on the Cultural Revolution