How to be virtuous, according to Seneca the Younger

If you were to ask the person sitting next to you what being a good person means, they’d probably say something along the lines of: “helping people”, or “being kind to animals”. That kind of thing. It’s probably what I’d say.

This generic idea of goodness could well have stemmed from Seneca the Younger. He was a philosopher, orator and playwright born in 4 BC, and went on to be consigliere to one of the most famous amoral men ever to walk the planet: the Emperor Nero.

Virtue, according to Seneca, was about how you lead your life – it’s a practical and theoretical aspect of philosophy. Virtue was about living according to reason.

Seneca believed that there was a pervading divine reason that dominates the world: he said that the wise man would be able to discern it and follow it willingly, instead of being dragged along by an arbitrary faith. Living a life of virtue showed your respect for that divine reason.

It was a joy to discover that Seneca, like me, didn’t eat meat. Some Christians think Seneca’s ideas are proto-Christian, but could they be proto-Morrissey, too?

"In Our Time" reviving my love of the classical period &philosophy. Fascinated by Stoic Philsophy Seneca truly was a visionary.

To be virtuous, in Seneca’s book, you had to understand your passions and put them in check. He acknowledged that passions were inevitable in their physical dimension, but were really just symptoms that one has to suppress in order for reason to prevail.

This is the only way you can live in accordance with logos – the divine breath of the world. My takeaway was that helping old ladies on and off buses is no good unless you’re doing it in accordance with the cosmos. According to Seneca, anyway.

Most of us today regard the “being a good person” thing as being distinct from any wider belief system or religious base. But for Seneca it was rooted in a philosophy called Stoicism, which deals with everything from the natural world, to grammar and dialectics. That’s where the idea of logos comes from. Stoicism shows a way to remain happy in spite of misfortunes, and insists on personal virtue.

What sparked incredibly lively debate among the In Our Time guests was another thing we grapple with today: how to be a rich man espousing the moral virtues of a life of poverty. Or, to put it in a modern context, it's like asking how you reconcile an anti-materialist stance with a love of trainers that cost north of £100.

Seneca used the classic get-out-of-jail-free card by saying that you can have riches, you just mustn’t become too attached to them. Mary Beard scoffed in response to this: “Rich men have used the Senecan excuse ever after!” 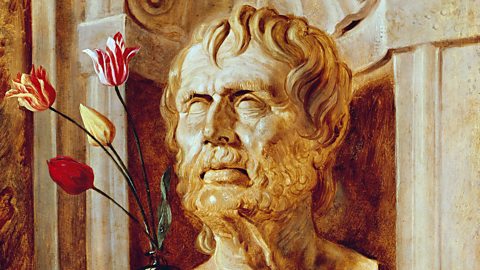 Was Seneca the Younger a hypocrite?

@wmarybeard not cutting Seneca any slack today on Radio 4, go on lass! Love the idea of him as a celebrity creep!

A dilemma that any of us is much less likely to be presented with (although you never do know) is how to reconcile your reasoned Stoic philosophy with the horrors of living in Rome and, for example, being party to the gore of the events in the arenas.

Putting gladiators in the arena is unethical even by the standards of some of the most unhinged rulers. So how does going along to watch them be slaughtered tally with being a holier-than-thou vegetarian?

Seneca has an answer for everything and appears to use his experiences to enrich his philosophy. He asks, how you can live your Stoic life and be brave under different circumstances? One of the models he uses is the gladiator in the arena: if the gladiator can die bravely then so – with all that stoic philosophy – can you... goes the theory.

While he may be a hypocrite in some respects, Seneca does try to introduce Stoic principles to the court world while he’s Nero’s tutor-slash-chief-adviser.

“How well did that go?” you might ask. Well, Nero’s sexual excesses became more extreme, he had his mother Agrippina assassinated, and then made Seneca kill himself. A mixed result.

In 65 AD soldiers present themselves at Seneca’s door and tell him to take his own life. Like a good Stoic, he follows the orders, taking hemlock like Socrates. It’s a protracted death and, while some think he meets it calmly and bravely, giving philosophical advice to his friends gathered around him, others (well, mostly Mary Beard) call it “a celebrity death”.

For all his hypocrisy, Seneca is self-aware. In his Dialogues he writes: “I know I’m not living the life that I’m preaching, but I’m trying.” Huge change has been effected across the millennia, but this idea – of not hitting your target but continuing to give it your best shot – hasn’t altered. Perhaps this is the closest to virtue any of us will ever get.