What's behind the five popular yoga poses loved by the world?

Yoga is often seen as a timeless tradition rooted in Indian philosophy and dating back thousands of years. Mukti Jain Campion, producer/presenter of The Secret History of Yoga, explores recent research which has revealed how much the practice of yoga has continuously evolved throughout its history.

The word yoga is many centuries old and was used to denote many different practices that developed from Jain, Buddhist and Hindu philosophy in ancient India. Physical poses were never the central focus of yoga for most of its history. Until the 19th century, yoga was almost exclusively the practice of ascetic Indian holy men aspiring to spiritual liberation through techniques such as meditation and sensory withdrawal. 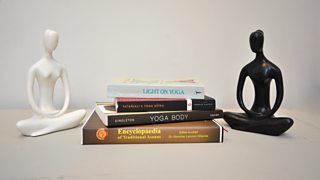 But this changed in the early 20th century when a worldwide body fitness craze, fuelled by illustrated magazines, led to an unprecedented mash-up of European health and strength regimes with Indian physical culture traditions.

Scandinavian gymnastic keep fit drills were introduced in schools and military training throughout India. European bodybuilders commanded huge audiences when they toured the subcontinent and their techniques were enthusiastically adopted. During the 1920s and '30s, (a period of growing Indian nationalism) a new generation of Indian fitness enthusiasts began to re-invent yoga as a modern, homegrown system for health and strength which could be practised by ordinary people.

In the process, these yoga innovators adopted many physical postures and techniques that had previously not been part of traditional yoga practice. The modern styles of yoga that are so well known globally today such as Ashtanga, Bikram, and Iyengar all emerged from these tangled multicultural roots.

Yoga poses or asanas, as they are known in Sanskrit, often reveal a fascinating history. 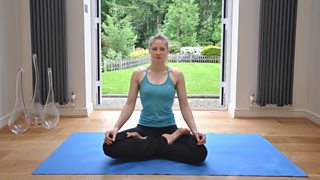 Today the Lotus is instantly recognisable as a universal symbol of “spiritual cool”, but it’s also probably the most ancient of yoga poses. According to Patanjali, the author of the oldest manual of yoga (compiled around 1500 years ago), the Lotus Pose has both the key characteristics necessary for an asana: comfort and stability. This cross-legged sitting posture is intended to provide a steady base for meditation and breath control which were the focus of yoga practice from its earliest known origins. 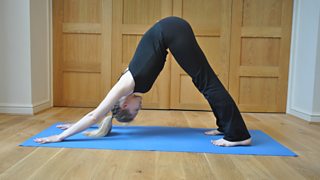 The use of animal names for yoga poses is very old: Patanjali says there are ways of sitting “like a curlew and a camel”. From the 13th century onwards, yoga manuscripts sometimes mention that there are 8.4 million asanas, representing every species of animal on earth. The iconic yoga pose now known as Downward Dog seems to correspond most closely to the Elephant Pose, which first appears in 18th century yoga manuscripts but is also found in traditional Indian wrestling exercises. Scandinavian keep-fit manuals such as Niels Bukh’s Primary Gymnastics (1925) which became hugely popular around the world, including India, also featured downward inverted-V postures. It seems likely that it was these gymnastic drills that popularised the posture so that it became incorporated into the modern yoga systems that were emerging in India in the 1920s and '30s.

The shoulderstand doesn’t feature in old yoga manuals until the 18th century, although there are earlier teachings of other inverted postures. Yogic physiology says that the life force stored in the head constantly drips down and is burned up in the digestive fire, so you need to invert yourself to slow down ageing and stave off death. 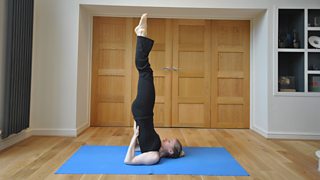 European callisthenics exercises developed in the early 20th century had their own form of shoulderstand, sometimes known as the candle. It was adopted as the emblem of the Women’s League of Health and Beauty, founded by Mrs Molly Bagot Stack in 1930, which became a mass movement in Britain and beyond. Called 'Legs in the Air', the shoulderstand was described as an exercise to aid slimming and prevent sagging organs. 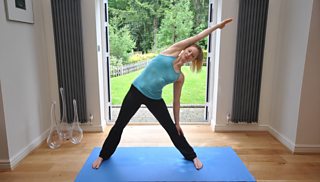 This is one of the many popular modern poses that doesn’t appear in the ancient yoga manuscripts, despite its ancient-sounding Sanskrit name, trikonasana. There appear to be no asymmetrical standing poses at all in the pre-modern era. But it was a common feature of many Scandinavian gymnastic keep fit regimes of the late 19th/early 20th century that were adopted widely in military training and schools, including in colonial India, and would have been familiar to the yoga innovators of the period.

Surya Namaskar – Salute to the Sun

The “Salute to the Sun” is a dynamic sequence comprising a series of linked forward and backward bends and lunges. Despite being such a central part of yoga practice today, there is no reference to it whatsoever in any pre-20th century yoga texts, where any form of dynamic exercises are rare. 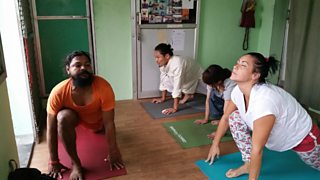 But a physically demanding exercise called Surya Namaskar does appear to be an ancient Indian practice described in many non-yoga manuscripts. In the early 20th century it was popularised by the Raja of Aundh as a kind of coordinated drill gymnastics. In his 1928 book The Ten Point Way to Health, he makes it very clear that his form of sun salutes are for physical fitness, for the improvement of the race and for the benefit of mass education in contemporary India. Click on the video to watch a yoga instructor in Varanasi teach the Sun Salutes.

A version of Surya Namaskar subsequently became a prominent feature of global yoga through Ashtanga Yoga (and other popular forms such as Power Yoga, Vinyasa, and Flow Yoga), formulated in the 1930s by the hugely influential yoga innovator T. Krishnamacharya in Mysore.

With thanks to James Mallinson (Author, Roots of Yoga, publ. Summer 2016), Mark Singleton (Author, Yoga Body – The Origins of Modern Posture Practice and Roots of Yoga) and Manmath Gharote (Editor, The Encyclopaedia of Traditional Asanas)

Further reading and listening on Radio 4

In the early 20th century, Eugen Sandow, known as the father of bodybuilding, was hugely popular in India and his teachings greatly influenced the new generation of Indian yoga innovators.