From Dracula to Batman, bats have infiltrated our culture and our psyches, despite the persisting sense that they are alien and unknowable. But as Brett Westwood discovered in Radio 4’s Natural Histories, bats are in fact one of the most successful and social mammals. 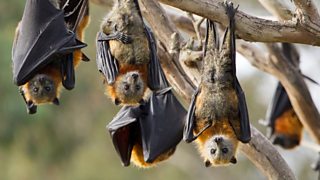 Become a bat person with this bountiful collection of bat facts…

Batman was the first superhero named after an animal. Bruce Wayne didn’t have any superpowers though. He trained to fight crime after his parents were murdered by a mugger.

Bruce picked a bat-inspired persona after a bat flew through a window pane at Wayne Manor.

Most bats in the UK are crevice dwellers. But if baby bats are being nursed back to health, they like to be tucked up into an oven glove or a duster! Ahhh!

These little flying foxes are new arrivals at the Australian Bat Clinic after they were separated them from their mothers.

The bat is a symbol of happiness and joy for Chinese people. Five bats together represent the “Five
Blessings”: long life, wealth, health, love of virtue and a peaceful death.

Bats’ ultrasound echolocation was the inspiration for human development of radar.

Scientists can identify a bat’s species from its ultrasound but must first alter the pitch to one which is audible to humans. 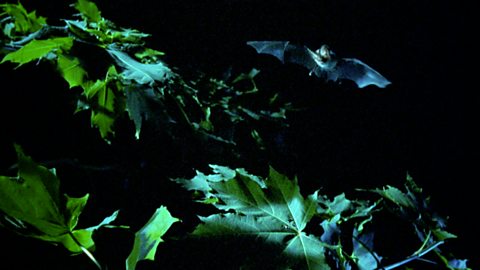 How bats stay one step ahead

Echo-location is just one part of the overall armoury of a bat on the hunt.

Bats famously hang upside down by their feet from branches and the roofs of caves. They don’t fall off when they are asleep or hibernating because their feet are in the clamped position when the muscles are relaxed.

There are several ideas about why bats hang upside down. One is that it makes it easy for them to get airborne quickly – they simply have to let go. Another is that they save energy in that position. 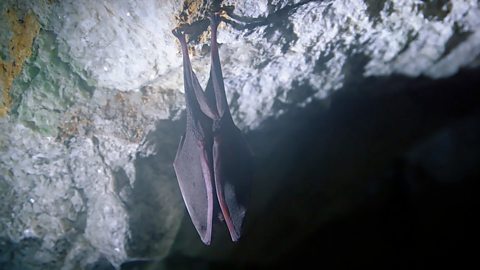 Bats are the only flying mammal. Other mammals – such as the flying squirrel – can glide but not truly fly like bats.

US scientists who monitored a group of Brazilian free-tailed bats found that they all achieved speeds of almost 100km/h (60mph) and one bat logged a top speed of 160km/h (almost 100mph). The fastest bird on record is the common swift which reaches about 112km/h (70mph).

Bats’ wings resemble human hands but with extended fingers and webbing between the fingers and limbs. Their scientific name – Chiroptera – means hand wing.

The flexibility of their wings gives bats more manoeuvrability in their flight than any other creature.

Singing plays an important role in the social lives of several species of bat.

Male free-tailed bats sing intricate and complex "love songs" to woo prospective female mates, research has found. Scientists discovered that their songs were more similar to those produced by birds than by other mammals.

Bats are found all over the world and represent almost a quarter of all known mammal species. There are 1300 species of bat and about half of them are either threatened or endangered.

Megabats or “flying foxes” are large bats with large eyes, small ears and a dog-like face. They are herbivores and are also known as "fruit bats" because of their diet.

Microbats have large ears, small eyes and small bodies and use echolocation to find their food.

Bats can be as large as a small dog or as small as a bee.

The largest bats are the flying foxes with wingspans of up to 1.8 metres (6ft).

At the other end of the scale is the Kitti's hog-nosed bat or bumblebee bat which weighs only 2 grams and is the world’s smallest mammal.

Most female bats have only one pup a year. Mothers can find their babies among thousands or millions of other bats by their unique voices and scents.

Bats live between 10 and 20 years. The oldest known bat lived for 41 years.

Bats “commute” along the same routes for years, following man-made lines like hedges or railway lines, which are conveniently straight.

Some bats migrate to warmer climate in winter. Others hibernate.

During hibernation, a bat’s heart beats about 11 times per minute. When they are flying, bats’ hearts pump over 1000 times a minute.

When hibernating, bats can survive freezing temperatures, even being encased in ice.

There are three species of vampire bats and they all live in Central and South America. They are small – the commonest grows to about 9cm – and they mostly feed on the blood of farm animals and birds. They rarely feed on human blood.

A vampire bat doesn’t suck blood but makes an incision on its host’s skin. It has an anticoagulant in its saliva to help the blood flow and laps it up with its tongue.

Bat droppings, called guano, are one of the richest fertilisers.

In a Gothic mansion at night, with bats swirling around him, Brett Westwood investigates our obsession with bats. 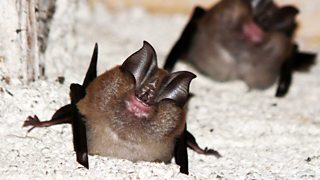 What is Natural Histories?

Brett Westwood looks at the impact nature has had on human culture and society across history. 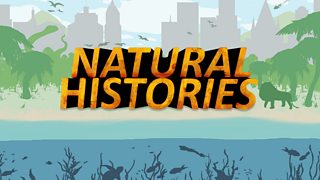 The creatures under investigation this series include the hare, the earthworm and the cuckoo.