Are these the world's eight ugliest animals?

Marking the documentary The Power of Cute, in which Lucy Cooke investigates the science behind our obsession with all things cute, we’ve put together a list of eight animals that are far from cute - but some of which are endangered - so don’t be too judgmental… ugly animals need love too!

Whether we admit it or not we have a natural tendency to make decisions based on appearance, from choosing a partner to buying a car. Such is the influence of aesthetics that there has even evolved a bias in conservation funding, as charities use charismatic mega-fauna; recognisable mammals, in marketing campaigns to drive donations. Let’s face it; giving a handful of change in a supermarket car park to support the Panda is a more attractive proposition than parting with a pound for the Chinese Giant Salamander… I mean what even is that?

In conservation terms it really does pay to be a large warm-blooded mammal and the cuter the better. Experts warn that any creature with big eyes and human traits is more likely to secure the most public, scientific, and political affection. Colourful animals, predators and those species useful to the human race also tend to be the most favoured - which alludes to the danger of us redefining the world’s future biodiversity purely based on what we find ‘pretty’ or ‘cute’.

This isn’t a joke - there is such a creature. It’s not the only animal with a peculiar name. Step forward the Pleasing Fungus Beetle, Tasseled Wobbegong, or Pink Fairy Armadillo… who on earth comes up with these names?

The Blobfish is part of the Psychrolutidae family and is an endangered deep sea fish commonly found at depths of 600 m to 1,200 m (2,000 and 3,900 ft.) off the coast of Southern Australia and Tasmania. The Blobfish poses no threat to humans but is under threat from fishing activity; specifically bottom trawling nets used to catch lobsters. Its face is a picture of misery: caused by its lack of bone and muscle structure. The staggering pressure at the depths they live (60 to 120 times as great as at sea level) keeps the fish intact. However, images of the fish are often taken out of the water, which explains its droopy appearance and look of despair.

The star nosed mole has no chance of winning any beauty contests - but pity is not required. This animal is a super-talented hunter with a place in the Guinness Book of World Records as fastest forager. Despite resembling an extra-terrestrial lifeform from the set of Dr Who, the mole is very much an earthly creature and can be found in underground tunnels built in marshy soil in parts of Canada and the north-eastern United States. The twenty-two fleshy pink appendages give this blind hamster-sized creature the ability to detect and consume a meal in 120 milliseconds.

This mole is not only an accomplished tunneller but also an excellent swimmer, thanks to its water repellent fur and clawed feet used for paddling. It has an ingenious way of smelling whilst submerged; it, exhales bubbles onto prey or objects before inhaling them to detect a scent.

The key to a cure for cancer? 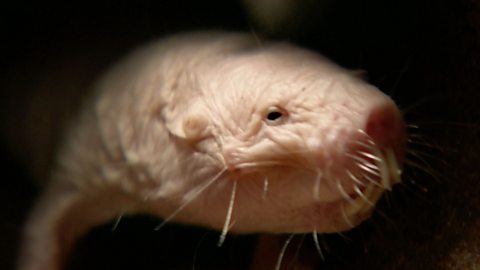 They may not be pretty but their stretchy skin holds the key to eternal youth.

It’s pain resistant, pink-wrinkled, cold-blooded, cancer immune – it’s the humble naked mole rat! A rodent - so different from any other species that it has been recognised by its own mammalian family called Heterocephalinae. The almost complete lack of hair is not down to premature balding or work-related stress; these mammals are unable to regulate their own body temperature. Fortunately, their burrows – found in parts of eastern Africa - are generally consistent in temperature and humidity.

Naked mole-rats lack a key neurotransmitter called substance P found in mammals and is responsible for distributing pain to the central nervous system meaning these animals are unable to feel pain. This is thought to be an evolutionary adaptation of animals living in high levels of carbon dioxide, which gives them resistance from the pain of acid forming in their tissues.

The naked mole rat has a high-resistance to cancerous tumours, which - along with being extraordinarily long-lived for a rodent (up to 31 years) - makes them the subject of scientific interest.

A symbol of bad luck

Ridiculously cute or horrifyingly ugly? The aye-aye is the largest nocturnal primate - related to the Lemur, it is found in the forest areas of Madagascar. It has extremely sensitive bat-like ears and long black bony fingers which it uses to detect grubs under tree bark, using an ingenious echo-location hunting technique.

Unfortunately, the aye-aye has been a victim of its own appearance and traditionally regarded as a harbinger of evil and hunted to the point of extinction. Despite the population recovering somewhat in recent years this primate is still listed as endangered because of deforestation and a slow reproductive cycle.

The national animal of Belize

The Baird’s Tapir makes the list mainly due to its unfortunate shaped nose. It is Central America’s largest land mammal; typically sized 1.5 metres in length, and is found mostly in forests or flooded lowland in Mexico, Belize, Honduras, or Guatemala. This solitary creature is also an endangered species – it is estimated that there are a few as 5,000 left in the wild due to deforestation and illegal hunting. 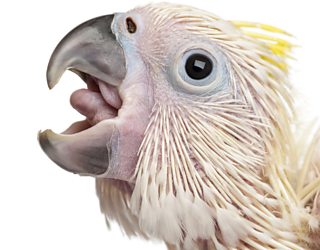 Tapirs are important to rainforest’s biodiversity since they help recycle nutrients and disperse seeds. The Baird’s tapir has a diet of seeds, fruit or aquatic vegetation, which means that this American mammal will always be found quite close to water.

Think of a miniature Sesame Street's Big Bird battling a serious alcohol addiction - this unfortunate start to their lives lasts until they leave the nest at 9 – 12 weeks. By contrast, a fully grown adult has stunning white plumage and a strident call. Perhaps the most notable characteristic of these birds is a striking erectile yellow crest that can reach up to 14 centimetres in length.

This parrot is endemic to the north and east of Australia and as far south as Tasmania. It uses its loud call to alert the flock of the presence of danger, especially when feeding on the ground. This behaviour is extremely well-known in Australian culture; so much so that the slang term for a criminal lookout that watches out for the police is often referred to as a cockatoo, or ‘cocky’ for short.

The viperfish uses luminescent organs called photophores to generate light in order to attract crustaceans and small fish. This prehistoric-looking monster can turn its body light on and off and on - in a process called bioluminescence. It waits motionless for advancing prey, often for several hours before launching a fearless attack. This ferocious deep-sea predator, typically 30 to 60 cm (12 - 24 inches) in length, uses giant fang-like teeth that protrude outside of the fish’s mouth, to impale its unsuspecting victims. But don’t let this fish stop you from dipping your sunburn toes in the sea on the hot summer’s day; it lives in the middle-to-lower depths (250–5,000 feet)… panic over!

A Viperfish, a species of marine fish in the genus Chauliodus. Image: Kevin Flay

This peculiar river monster is occasionally referred to as a living fossil, as it’s one of only three living species of the family Cryptobranchidae - which dates back 170 million years. The salamander is the world’s largest amphibian (known to reach lengths of 180cm) and is endemic to rocky streams in China and Taiwan. It has lungs and breathes air, but almost always stays submerged in water. This breed of the salamander has a distinct appearance, with small eyes, large flat head, and brown mottled wrinkly skin.

It’s believed that hunting and river pollution are factors responsible for the estimated 80% decline in population since 1950, which is why it is now classified as a critically endangered species. The Chinese Government have taken steps to protect the salamander as a Class II Protected Species; however, they are still illegally hunted and eaten as a luxury delicacy or used in traditional medicine.

Explore the science behind our obsession with all things cute in The Power of Cute.