In a UFO special of The Infinite Monkey Cage, Brian Cox and Robin Ince are joined for a close encounter of the first kind by comedian Lucy Beaumont, astronomer Maggie Aderin-Pocock, astrophysicist Professor Tim O’Brien, and science presenter Dallas Campbell to ask the probing question: does alien life exist?

All agree the answer is probably yes. So will we be making contact with extraterrestrials anytime soon? The jury’s out.

1. It’s a numbers game, and probability suggests aliens are out there

Most scientists agree that alien life almost certainly exists in the universe somewhere. Our galaxy contains in the region of 300 billion stars, and we’re now discovering planets travelling around these stars. The more we look, and the more technology we put out there, the more of these exoplanets we find. To date, we have detected around 4,000 – and that’s just in our galaxy. If we look at the universe as a whole, then there are approximately 200 billion galaxies. Why would life just occur here? “We’re pretty convinced it’s out there,” says space scientist Maggie Aderin-Pocock. “It is purely a numbers game. It is probability.”

2. We already know of hundreds of potentially habitable planets

We are able to measure the atmospheres of these exoplanets using a technique called spectroscopy. This is where starlight passes through the atmosphere of the exoplanet, allowing us to do a chemical analysis. If we detect the kind of substances we find in Earth’s atmosphere, it wouldn’t necessarily confirm that there’s life out there – but it’s a strong indication that it’s possible. “We know of hundreds of potentially habitable planets,” says Professor Tim O’Brien. “We’re almost certainly – within the next decade or so – going to find a planet that may well even show potential evidence for life.”

3. We’ve found life on earth in places that we didn’t think life could possibly exist

When we’re contemplating the existence of life beyond our planet, it’s worth considering that we’ve discovered microbes inhabiting spaces on Earth where the idea of survival was previously inconceivable. These lifeforms are based on familiar DNA – so it’s life as we know it – but they exist in the deep trenches of our oceans, far away from sunlight. In the past, we believed life could only exist on a planet, a certain distance from its local star (so it has the right levels of radiation). Finding life on Earth thriving where we didn’t think it possible has opened our eyes to the concept that there might be moons able to support life too. 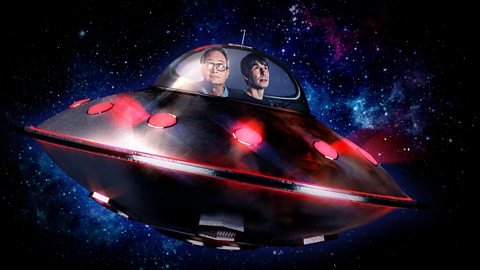 4. The life that’s out there may not be intelligent life

Most scientists are positive about the chances of life existing in the universe. What we don’t know is if there’s intelligent life. “For most of the history of life on Earth it was very simple life. It was bacterial life for billions of years in fact,” says Tim. And it was a series of chance events that led to the development of even multicellular life on our planet. For alien life to make contact, it needs to be physically - and technologically -advanced.

5. Intelligent lifeforms may be living in conditions that make communication difficult

With 300 billion stars in the Milky Way, many with solar systems, and ten billion years or more in which a civilisation could have arisen in this galaxy, it is difficult to believe that no lifeform ever reached the point where it could travel across interstellar distances. As the great Italian physicist Enrico Fermi said, it’s hard to explain why aliens haven’t made it to Earth. But there are ways of explaining why this hasn’t happened, says Maggie: “Our biggest problem is we only have one example of life, and that’s life on this planet.”

We have to think outside the box. For example, she says, “If you live by a star which is quite active, you might live below the ground… It doesn’t mean that intelligent life isn’t out there but you might not have the means of transmitting because you live below the surface.”

6. Or we may be trying to communicate to each other using opposing methods

As soon as big telescopes like the one at Jodrell Bank Observatory were built, scientists realised that if there was a civilisation out there with a similar bit of technology, we might be able to pick up signals sent from one to the other. “We’ve now used radio telescopes to listen out for signals from extra-terrestrial civilisations since about 1960,” says Tim who is Director of Jodrell Bank. However, there are so many different ways in which a lifeform might send signals, we could spend our lives looking for them and get nowhere. It’s possible that we just haven’t hit upon the right method.

7. Stars are so far away, it could take thousands of years for an extra-terrestrial message to reach us

As well as method of communication, distance poses a huge obstacle. For a new project called Breakthrough Listen, scientists are searching a million of the nearest stars, but they’re also looking at stars that are in the middle of our Milky Way, 25,000 light years away. A message sent from one of these stars would need to travel in the region of 25,000 years before it even reached us. If alien life is out there, it could take thousands of years before we hear a peep from it.

An alien civilisation also needs to exist at the same time as humans. It’s possible that extra-terrestrials have made contact with Earth – even visited – but it was way back in the Jurassic era, when dinosaurs roamed the earth, and so we simply don’t know about it. “If our civilisations don’t overlap,” says Maggie, “then we will never meet the aliens.” Perhaps they came a long time ago, or they’ll come in the future, long after human life has expired.

9. Long distance space travel isn’t yet possible for us – and may not be for them

It’s currently beyond our capabilities to send a large spacecraft between the stars. As things stand, we are able to send radio waves at the speed of light – but that’s just a radio wave, travelling through the vacuum of space. If we want to send physical mass out into the ether, in the form of probes or people, then it gets a lot more challenging.

Breakthrough Starshot, a project championed by Stephen Hawking before he died, is exploring the option of using a solar sail – a sheet of metallised plastic that sits in space – to transmit objects into our solar system. It would involve a huge bank of lasers shooting photons up to hit the solar sail, transfer their momentum, and send the solar sail accelerating off at up to a fifth of the speed of light. As exciting as this is, it would still take a hundred years to reach a planet 20 light years away – and current technology means we can’t send anything heavier than one gram in weight. Humans certainly won’t be getting out there any time soon! And it’s highly possible that any aliens haven’t cracked intergalactic space travel either.

10. Extraterrestrials have to actually want to visit us

Even if lifeforms with technology far more advanced than our own exist, they have to want to make contact. Any aliens out there may feel apathetic about us Earthlings! And they may not be overly keen on the idea of travelling between the stars for thousands of years in order to get up close and personal. This could also explain why we’ve never had extraterrestrial visitations – they’re simply happy where they are.