How can I maintain muscle strength in later life?

As we get older it gets harder for us to build and maintain muscle – in fact, from around the age of 50 onwards, we lose 1% of our muscle mass every year, and our strength deteriorates at almost double that rate. 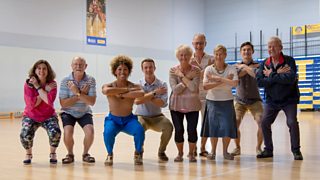 This loss is exacerbated by inactivity – if we don’t, or can’t, use our muscles regularly, they will decline further and faster. Studies have shown that a 10-day stay in hospital could lead to a 10% loss of leg muscle and a 15% loss of strength.

The best way to fight this decline is to train with weights – known as resistance training.

It’s recommended that older adults do this twice a week, and that they aim to lift a load that is around 60% of the maximum that they can lift in a single repetition (described by scientists as 60% of their one repetition max, or 1RM).

However, not everyone wants or is able to go to the gym, so Dr Zoe Williams set out to investigate an easier way to build muscle which was being tested by Dr Oly Perkin at the University of Bath.

Oly recruited 20 participants between the ages of 65 and 80 and split them into two groups: a control group who did no exercise and a group who were asked to do a series of simple muscle exercises twice day, once in the morning and once in the evening.

There were five exercises in total and the participants had to do each one for a minute with a minute of rest in between. Before and after the study, their muscle function, power, strength and size were measured.

Overall the volunteers’ muscle strength improved by 5%, and their thigh muscle size increased by 2%. So in just one month, they gained the same amount of muscle that they would naturally lose in two years.

In fact, follow-up tests suggest that for this age group the sit to stand exercise can activate as much muscle as the recommended gym-based resistance exercises (in this case a leg press exercise and a knee extension exercise where individuals are lifting 60% of their one repetition maximum).

If you do try these exercises, you may find that, once a certain amount of strength has been built up, you need to increase the amount you do, or move on to weight training to continue to see benefits.

But if you’re over 65, and especially if you’re emerging from a stay in hospital, introducing the sit-to-stand exercise into your routine twice a day could be the single most important thing you do to maintain your strength and independence.

The exercises in the study were: