The Biggest Weekend - How To Watch and Listen

Can't make it to one of our four locations? Got FOMO? Never fear! We've got you covered...

It’s the absolute Biggest Weekend of music we’ve ever created and, from 120 hours of live-streams online, and all the megastars live on TV and radio, here’s everything you need to know so you won’t miss a thing. 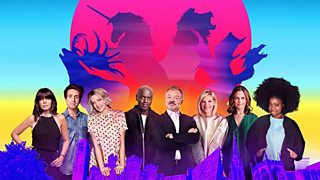 And the coverage doesn’t end when the last artist closes the main stage on Monday; we'll also have an exclusive highlights programme available to watch on BBC Red Button.

Plan your weekend with our handy guide on how to watch and listen...

We'll be streaming live online across all nine stages in all four locations! 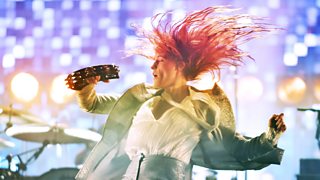 You'll be able to watch all of the action, every day right here on the Biggest Weekend website - bbc.co.uk/biggestweekend

You'll also be able to watch every stage live, every day on BBC iPlayer using your computer, mobile, tablet or connected TV.

And it doesn't end there... highlight performances from the Main Stages and the Other Stages from across all four cities will be made available to watch on-demand right here and on the iPlayer, including exclusively curated videos so fans can enjoy the funniest, most breath-taking and most magnificent moments from across the weekend.

And, of course you can keep up with all the action as it happens on social media...

We've all been there, you can't wait to watch your favourite artist's latest festival performance, you grab your phone or tablet or hit the red button get settled and... its not there 😞 it's confusing and it can be frustrating.

Here are some of the reasons why that can happen 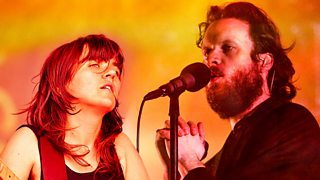 Lauren Laverne and Colin Murray present coverage of The Biggest Weekend from the Titanic Slipways in Belfast, with highlights of the opening performance of the day from Father John Misty, in a unique collaboration with the Ulster Orchestra. Also featuring Melbourne-based garage rocker Courtney Barnett.

20.00 - Manic Street Preachers and The Breeders

A full set from the Manic Street Preachers live from Belfast, where the band have played many times over the years, including a 'legendary' gig at the Limelight in 1990.

Also featuring The Breeders, lead by sisters Kim and Kelley Deal and Josephine Wiggs. After an extended hiatus, they're back with the new album All Nerve. 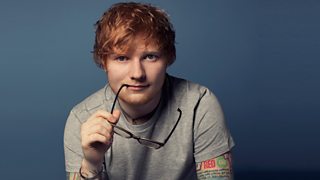 Graham Norton samples the Biggest Weekend experience and introduces Ed Sheeran's opening set from Singleton Park in Swansea, home to the Radio 1-curated location of the Biggest Weekend. Sheeran continues to dominate the world of pop music and, despite being in the middle of four stadium shows in Manchester, pops down to Swansea to get festivities under way.

Edith Bowman presents the whole of the headlining set by Noel Gallagher's High Flying Birds, flying high on the success of their third and most experimental album Who Built The Moon?, with a set that draws on all the High Flying Birds material and some cannily chosen Oasis numbers. 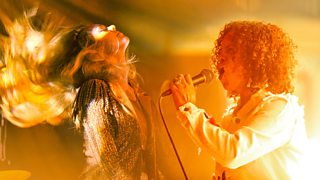 Lauren Laverne and Joe Lindsay go Scandi with two Swedish-born outfits to restart coverage of The Biggest Weekend, including a performance from Neneh Cherry and First Aid Kit.

Bringing Born Slippy to Belfast and Saturday night's Biggest Weekend coverage to a pulsating close! Underworld ruled the airwaves and dance floors at the height of the dance music boom of the mid-90s! 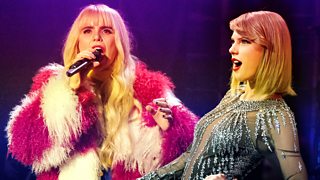 Alex Jones and Nick Grimshaw are live from Singleton Park, Swansea, as Taylor Swift performs a one-off preview of songs from her Reputation world tour for the Biggest Weekend. Following Taylor's set are highlights of Paloma Faith from the Radio 2-curated event in Coventry. 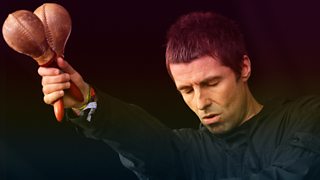 Celebrate the mighty gathering of girl power at The Biggest Weekend in Singleton Park, Swansea, with highlights from the likes of Camilla Cabello, Demi Lovato, Jessie Ware and Stefflon Don.

Clara Amfo and Alice Levine present Florence + The Machine's live headlining set from Singleton Park, Swansea. Rapidly becoming a veteran headlining act after her stunning performance at Glastonbury in 2015, Florence Welch and her band mix songs from her upcoming fourth album High As Hope, as well some of her many anthems from across her unfolding career.

Jo Whiley presents Britain's favourite rock and roll star and his full headlining set from Radio 2's curated day in Coventry as part of The Biggest Weekend. Liam Gallagher is on a roll after the success of debut solo album As You Were and a series of swaggering live shows across the nation which blend songs like Wall of Glass with Oasis classics.

Jo Whiley and Trevor Nelson introduce highlights from the Radio 2-curated event in War Memorial Park in Coventry as part of The Biggest Weekend. Featuring performances from Trinidad-born singer and favourite of the charts in the early to mid-1980s Billy Ocean, local Coventry and two-tone ska revival outfit The Selecter, the anthem-laden outfits of Stereophonics and Snow Patrol, and much more! 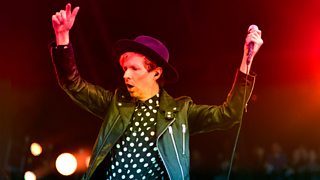 Lauren Laverne is live from the Titanic Slipways for the first day of the BBC's Biggest Weekend. She welcomes the Belfast-born DJ David Holmes to the Desert Island Disco, Courtney Barnett performs an acoustic session, and catches up with Beck.

Steve Lamacq has live sets from Courtney Barnett, The Breeders and Manic Street Preachers, plus highlights from some of the acts who've already taken to the stage!

Mary Anne Hobbs brings you all the chat and tunes before Orbital take to the stage!

21.00 - With Orbital live from The Biggest Weekend in Belfast

Featuring the whole of Orbital's headline set and highlights from across the day, including Baloji, Hannah Peel, Father John Misty and Courtney Barnett. 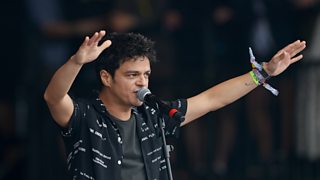 From the iconic and historic Scone Palace, the BBC Scottish Symphony Orchestra, conducted by Martyn Brabbins, is joined by a host of brilliant musicians including Edinburgh-born Karine Polwart, winner of the BBC Radio 2 Folk Singer of the Year, performing some of her best known tunes.

After the Interval, one of classical music's true greats, the violinist, Nigel Kennedy and his band join the BBC SSO, to play some of the greatest music ever written. The concert is presented from the stage by Katie Derham.

23.00 - The Biggest Weekend with Kathryn Tickell 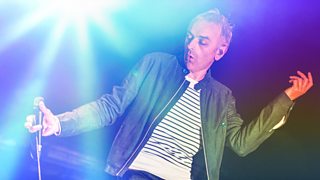 Lauren Laverne is live as the Biggest Weekend continues. On the second day of live music from Belfast's Titanic Slipways, Lauren catches up with Young Fathers and Karl Hyde from Underworld.

Mark Radcliffe and Stuart Maconie are live from The Titanic Slipways with special guests and live music from Goldie, Young Fathers and Little Dragon.

Tom presents live with a unique mix of music.

21.00 - With Underworld live from the Biggest Weekend in Belfast

Featuring the whole of Underworld's headline set, and highlights from across the day, including Dream Wife, Soak, Young Fathers, First Aid Kit and Neneh Cherry. 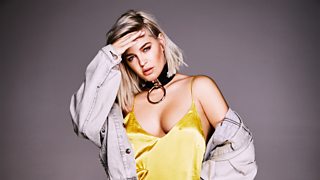 Matt Edmondson and Mollie King are live from Swansea as Ed Sheeran hits the main stage for Radio 1!

Scott Mills, Chris Stark and Clara Amfo are backstage for Radio 1 in Swansea and have live music highlights from Anne-Marie and Jess Glynne on the main stage.

Dev, Alice Levine and Cel Spellman are backstage for Radio 1 in Swansea with live music from Clean Bandit and more!

Craig David and Sam Smith are on the main stage with Radio 1 in Swansea - enjoy their sets and more with Annie Mac, Nick Grimshaw and Charlie Sloth!

Huw Stephens rounds up all the action from the Other Stage at BBC Music's Biggest Weekend in Swansea.

Radio 2 in Perth and Coventry 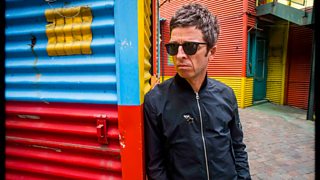 Ken Bruce, Claudia Winkleman and Sara Cox are live backstage at BBC Music's Biggest Weekend in the grounds of Scone Palace in Perth. They are bringing you live music from across the day and interviews with all the stars performing live including Amy Macdonald, Emeli Sande, Squeeze, The Shires, Julie Fowlis and The Beat starring Dave Wakeling.

Ken, Claudia and Sara also learn more about the incredible history of Scone Palace. As one of Scotland's most important stately homes, it's been the seat of parliaments and the crowning place of the Kings of Scots, including Macbeth and Robert The Bruce. Ken Bruce also indulges in one of his favourite pastimes, as he finds out what it takes to make a great Scottish whisky and why it's become such an iconic drink. 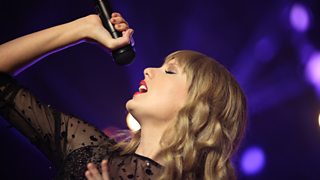 Day 2 with Radio 1 in Swansea kicks off with Rita Ora on the main stage. Join Matt Edmondson and Mollie King for full coverage...

Scott Mills, Chris Stark and Clara Amfo have live music highlights from Niall Horan and Demi Lovato on the main stage in Swansea.

Dev and Alice Levine rock out with Thirty Seconds To Mars.

Taylor Swift and Florence + The Machine are on the main stage with Radio 1 in Swansea - enjoy their sets with Annie Mac, Nick Grimshaw and Charlie Sloth!

Huw Stephens rounds up all the action from the Other Stage at BBC Music's Biggest Weekend in Swansea.

15.00 - Live from the War Memorial Park in Coventry 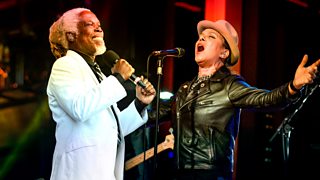 Jo Whiley, Simon Mayo and Trevor Nelson are live backstage at BBC Music's Biggest Weekend at the War Memorial Park in Coventry. They are bringing you live music from across the day and interviews with acts including local 2-Tone pioneers The Selecter, Stereophonics, Jamie Cullum, Billy Ocean, Snow Patrol and UB40 featuring Ali, Astro and Mickey.

At 7pm the presenters cross to the stage to introduce full headline performances from Paloma Faith and Liam Gallagher. 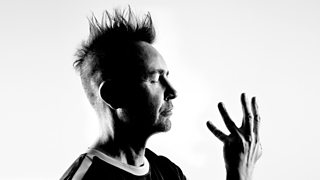 There'll also be an appearance from the new BBC Young Musician winner Lauren Zhang; and in part 2 violin legend Nigel Kennedy plays excerpts from Vivaldi's Four Seasons, and his own unique tribute to Jimi Hendrix. Live from the War Memorial Park, Coventry.