The Dykes have been farming in the shadow of the Pentland Hills since the 1950s and breed prolific Scotch mules to produce their own fat lambs. They also have a small flock of pure-bred Bluefaced Leicester sheep. They’re a generational farming family; son Hamish is taking the reins from his father John. John is far from retired and still works with both the sheep and the cattle while breeding pedigree Highland ponies with his wife Kate. Hamish’s wife, Susie, is a farmer’s daughter, and this year started work full time on the farm so she can spend more time with Hamish and their children, Rosie and Murdo. They have over a thousand sheep, seventy cattle and three friendly dogs. 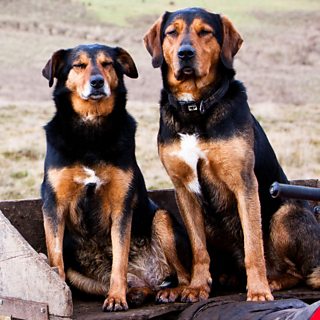 Hamish doesn’t use traditional Border collies as his sheepdogs. Instead he has a pair of New Zealand Huntaways. Jess and her son Doug use their ‘voices’ to herd the sheep. When Hamish asks them to ‘speak’ they know it’s time to round up the flock with a few choice barks and a bit of friendly persuasion.

A successful lambing really starts with the right rams. In autumn the rams or 'tups' are put in to mate with the ewes. This is a process known as 'tupping'. The Dykes have over a thousand ewes and use a variety of breeds of rams. They use Bluefaced Leicester rams with Scottish Blackface sheep to produce prolific Scotch mules, and they use meatier Texels and Beltexes with their mule flock to produce good meaty lamb for the table. But for his ‘hoggs’, Hamish was on the lookout for something different. 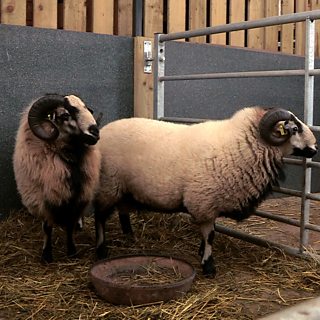 Hoggs aren’t pigs, they’re ewes still in their first year that will be first time mums. They need an easy introduction to motherhood. Hamish likes to put them with small, hardy rams so the ‘hoggs’ will have small hardy lambs. Somehow Kate managed to sell Hamish two of the Badgerface Welsh Mountain rams she breeds at home in Wales. They’re named for their distinctive markings and are a tough native breed. After making the 350-mile journey north to Scotland the rams (now called Ivor and Owen) were put to work on the farm.

Like most farmers, the Dykes scan their sheep with ultrasound so they know exactly how many lambs they’re expecting. It means they can manage their diet and make sure those expecting twins or triplets get enough to eat. Each sheep is marked accordingly. The Dykes use one blue dot to show a ewe is carrying a single lamb, no mark to denote twins, a red dot for triplets and two red dots for quads. They don’t mark the twins because hopefully that should be the majority of their flock. 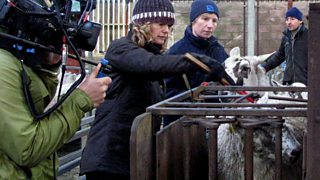 As with most farmers, two is the magic number. They’d like every ewe to be carrying twins because that’s all they can suckle. Sheep can have anything from one to five lambs but they only have two teats so the milk bar is set up for twins. Triplets can be adopted onto ewes who only have one lamb or they’ll need to be bottle fed. It is an expensive and time-consuming business.