Amazing arts treats to watch and listen to this Christmas

Christmas is the perfect time to indulge in guilt-free binge watching and listening. But don’t be ruled by a remote control – playlist your festive treats with our selection box of cultural delights on BBC iPlayer and BBC Sounds. Entertainment, enchantment, mystery and marvels await.

Mark Kermode tees up this season of film nostalgia with a glittering selection of Christmas cinematic treats, from much-loved classics to hidden gems, Hollywood blockbusters to international films. Mark reveals the film-making techniques and storytelling secrets that make these movies so successful.

The programme is followed by one of Mark's picks, classic RKO Christmas film The Bishop's Wife, featuring a stellar cast including Cary Grant, Loretta Young and David Niven.

One of the big beasts of the Christmas schedule is a new adaptation of Watership Down, the classic best-selling children's book by Richard Adams about the life-and-death struggles of a group of rabbits. The 1978 animated film is often said to have traumatised a whole generation of children, but is also revered as a beautifully evocative hand-drawn, cel-animated landmark in British animation.

The new digitally animated version boasts an incredible cast of voice actors including James McAvoy, Ben Kinsley, Gemma Arteton, Peter Capaldi, Olivia Colman, John Boyega and Mackenzie Crook. It is showing in two parts over the weekend of 22 and 23 December.

Tom Bidwell, who wrote the new adaptation, says, "my vision for our version was to show how much of a fantastic world builder Richard was - to give it the scale and time it deserves and hopefully introduce his work to a new generation."

At the very least it should provoke some inter-generational squabbles about the merits of both adaptations. And what could be more Christmassy than that?

22 and 23 December, BBC One and BBC iPlayer
Q&A with writer Tom Bidwell 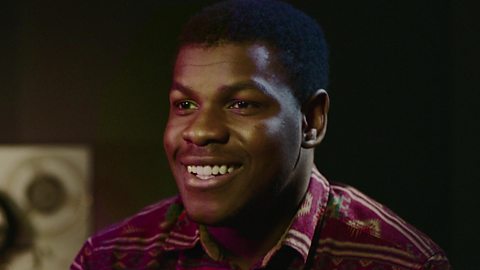 John Boyega: How Do You Prepare to Play a Rabbit?

The festive season can’t all be fun and games, and what better time to dim the lights and indulge in a classic Christmas tradition, the ghost story? Writer and director Mark Gatiss brings it back to life with a chilling new tale for BBC Four.

Simon Callow plays Aubrey Judd, the veteran host of a long-running radio horror series called The Dead Room. The presenter and national treasure finds that he must adapt to changing times and tastes. But whatever happened to the classic ghost stories? The good old days?

Aubrey discovers that all is not quiet in the eerie radio studio, and that elements of his own past are not as dead and buried as he perhaps hoped. Keep the mood dark this Christmas Eve with two classic M.R. James adaptations, Lost Hearts and The Ash Tree, showing immediately after The Dead Room.

Mark Gatiss on The Dead Room

Simon Callow and Anjli Mohindra in The Dead Room, set and filmed at the legendary BBC Maida Vale studios

Exploring a 'longing for longer things... that will take you out of something for a bit", BBC Radio 3 goes slow this Christmas Eve, so pull up an armchair and prepare for serious relaxation and contemplation. Writer Horatio Clare is the Winter Wanderer, heading into Germany’s Black Forest for a three hour real-time exploration of the sights and sensations of Europe’s ancient forest.

The chance to walk and talk to Radio 3 listeners through the glades and moods of the ancient European forest at Christmas time would delight any writer.
Horatio Clare

The wanderer was a widely celebrated figure in the Romantic period, and Horatio will be sharing the thoughts and work of great writers who were inspired by nature: Goethe, novelist Herman Hesse, American transcendentalist philosopher Henry David Thoreau and the English Romantic poet Coleridge, who also walked in Germany’s forests; with music including Schubert’s great song-cycle Winterreise (Winter Journey), folk tunes and Mahler’s epic orchestral songs.

There will be thoughts about the dying embers of the day and of the year, and of coming home from travels in time for Christmas. Whatever time you finally get to the armchair, on the BBC Sounds website you can rewind and restart a live programme.

Christmas Eve, 16:30-19:30, BBC Radio 3. Part of Into The Forest, a year-long theme exploring the enduring and magical influence of the natural landscape on music and the arts.

The choir rehearse for A Festival of Nine Lessons and Carols at King's College, Cambridge | Getty Images

In the candlelit Chapel of King’s College at Cambridge, the world-famous choir performs a glorious selection of carols and readings. This traditional celebration of Christmas started 100 years ago at the end of WWI - it was one of the first BBC Radio outside broadcasts – and an accompanying documentary follows a year in the life of the choir as it celebrates the centenary of the Festival of Nine Lessons and Carols.

Carols include Silent Night and What Sweeter Music, and baritone Roderick Williams and cellist Guy Johnston join the choir for Vaughan Williams’ Fantasia on Christmas Carols. Proceedings start, as they have for a century, with a lone chorister singing Once in Royal David’s City.

The celebration is broadcast live on BBC Radio 4 and shown shortly afterwards on BBC Two.

What to do? It’s Christmas morning, the presents have been opened and there’s four hours until lunch. Make yourself a light snack and fire up the BBC Sounds website or app. Perhaps you weren't tuned into BBC Radio 4 at 7am this morning, but navigate to With Great Pleasure at Christmas: Neil Gaiman for an hour in the company of the fantasy writer as he shares the writing that he loves.

From Mary Poppins and Christmas in Wind in the Willows, to The Hitchhiker's Guide to the Galaxy and poems by Terry Pratchett, this eclectic mix is read by Peter Capaldi, Nina Sosanya and John Finnemore. Music comes from the Ukulele Orchestra of Great Britain.

Escape into another world with BBC Radio 4's Book of the Week at Christmas, which features Michael Caine reading his autobiography Blowing the Bloody Doors Off; early instalments cover Caine's days as a struggling actor and the life lessons therein. Catch up on the opening episode from Christmas Eve, in which the veteran performer tells the story of a meeting with the Duke, John Wayne.

In today’s episode, Caine's luck starts to change as he makes his way in the world of movies. A further three episodes over consecutive days continue the journey through an incredible career.

Artists of the Royal Ballet company in Liam Scarlett's adaptation of Swan Lake at the Royal Opera House, May 2018 | Getty Images

Filmed at the Royal Opera House in Covent Garden, the production stars Marianela Núñez as Odette / Odile and Vadim Muntagirov as Prince Siegfried.

In the latest instalment in the collection of Agatha Christie stories adapted for the BBC, this classic 1936 title sees the great John Malkovich play an older and greyer Hercule Poirot. When he receives letters threatening murder, and no-one listens to his appeals, the once great detective must take matters into his own hands.

In a fascinating essay on Agatha Christie in the London Review of Books, novelist, journalist and Christie fan John Lanchester says,

“[Murder on the Orient Express] is a great gift for the theatrical profession, since every one of the characters is an equal ‘turn’; the result is that adaptations tend to become films in which actors are chewing the scenery while also phoning it in. Witness the completely pointless recent remake with Kenneth Branagh as Poirot. John Malkovich is about to impersonate the great detective in a Christmas adaptation of The ABC Murders – now that one I’m looking forward to.”

Boxing Day... or Box Set Day as BBC Radio is calling it this year, with good reason. On BBC Sounds you can listen to 15 classic adaptations of great works of literature, including Christmas stories from F Scott Fitzgerald, Hans Christian Andersen and The Brothers Grimm. The collection will build in the coming months to a total of 100. Perfect for expanding your cultural library.

Also included in the bonanza are box sets of many radio programmes, including BBC 6Music's Wise Women interviewed over Christmases past, comedy and dramas such as Tinsel Girl, Small Scenes and Curious Under The Stars.

And Neil Gaiman crops up again on Radio 4. This time it's a new adaptation of Norse Mythology, with a world-class cast including Derek Jacobi, Diana Rigg and Natalie Dormer, continuing the station's Gaiman dramatisations and inviting listeners into a world of gods and monsters.

Shaun And The Three Brians

A 6Music Science and Music special as celebrated musician and producer Brian Eno and Professor Brian Cox, along with a special mystery Brian, join Shaun Keaveny on Boxing Day.

For Christmas week, BBC Radio 3's Late Junction is guest edited and presented by comedian and music fanatic Stewart Lee. His guests include musician Richard Dawson, who is one of the leading lights of the British folk scene, and comedian and left-field music fan Tim Key. Entertainment guaranteed.

If the delights of BBC Sounds aren't quite enough to get you through the days between Christmas and New Year, the television arts event of the year is available to watch in its entirety on BBC iPlayer. Three years in the making, Civilisations explores thousands of years of human culture over nine riveting hours in the company of three different authors and presenters.

Simon Schama, Mary Beard and David Olusoga each bring their unique perspective and knowledge to this fascinating journey covering more than 500 works of art over 50,000 years of human history.

Petroc Trelawny introduces this traditional rousing start to the year, live from the opulent Golden Hall of the Musikverein. The Vienna Philharmonic performs an array of polkas, waltzes and gallops by the Strauss family and their contemporaries.

Bring in the New Year in fine style wherever you are, as the concert is live on both TV and Radio. As always the festiviteis close with the ever-popular By the Beautiful Blue Danube and the foot-stamping Radetzky March.