The WW1 At Home Live Events

Visiting locations across the UK, from May to September 2014

The WW1 At Home Live Events will reflect on the dramatic impact the war had on families and communities, as well as helping people to explore their own relatives' links to the war. 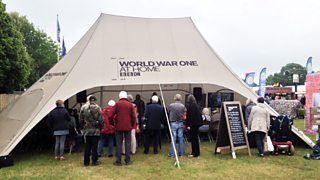 Discover more about the war

The family-friendly events will include hands-on activities, performances and interactive sessions. The World War One At Home Live Events will feature a mix of eight flagship events, as well as 17 others.

People attending the eight large-scale events in Woolwich, Wolverhampton, Sunderland, Dundee, Bristol, Rhyl, Portrush and Nottingham can visit The Briefing Room for interviews and presentations hosted by BBC stars including actor Larry Lamb. They can volunteer to be put through their paces on an outdoor Parade Ground and, at a number of events, make their own World War One At Home ID Permit to take away in The Recruitment Office. People can also learn about how medicine and communications were transformed during the war, including demonstrations of how carrier pigeons were an invaluable resource for sending messages.

As well as the eight flagship events, the World War One At Home Live Events will visit 17 other sites including The Suffolk Show, Great Yorkshire Show, Weymouth Carnival and Leicester City Festival. In addition to making their own ID Permits and learning about communications, visitors can also have a go at being a war reporter and meet experts from Imperial War Museums to search their families’ connections to the war. They can also hear interviews with BBC personalities and local experts and explore hands on activities in The Pals Tent and meet BBC Local Radio teams as the stations broadcast live from each site.

The World War One At Home Live Events are a partnership between BBC Learning and BBC English Regions. The BBC also continues its partnership with Imperial War Museums (IWM) during the Centenary commemorations and IWM's Lives of the First World War will be an integral part of the tour. 14-18 NOW are also key partners, and visitors to most sites along the BBC World War One At Home Tour will be invited to take part in the nationwide project Letter to An Unknown Soldier, inspired by the famous memorial statue of a soldier at Paddington Station in London. Other partners include: The Royal Signals Museum; Royal Pigeon Racing Association and The Royal College of Pathologists.

Nearer the time of the event, more information can be found on Things To Do.

Entry to many of the events is free. Flagship BBC World War One At Home Events are marked *

WW1 on the BBC