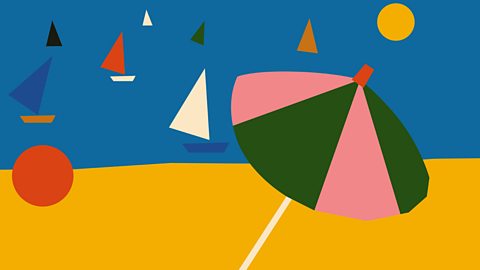 In the middle of the South-East Ocean, lies a beautiful, enchanted island. The tropical, sandy beaches have swaying palm trees, colonies of menacing red crabs and turtles hiding in their shells. The sea has countless species of fish and the colossal, lush rainforest is filled with animals. Even though the animals are different, they live in harmony, only eating what grows, not each other. The reason - this island is unique, everything lives like a great, big family. The best thing about the island is its magical powers which come from the sun. It has a waterfall of youth, that can make anybody younger. In the rainforest, the red, cherry-like berries can cure any illness.

One day, a sailor found himself deserted on the island. A giant wave picked him up and washed him onto the beach. Breathless, he lifted himself up and started glaring into the rainforest. He saw mysterious ruby berries glowing in the distance. He ran towards them, reached out a hungry hand but, another hand knocked it away. The sailor asked "Who was that?". Nobody answered. He tried again but the same thing happened. Now his face was red with rage, he tried several times but the same thing happened. Sweat rolled down his cheeks. The sailor asked again until, finally, a panther revealed himself and said "Hello, friend. We come in peace". The sailor drew his pistol with a shaky hand. "Why can't I eat these?". The panther replied, "please eat anything on the island except our berries. They are special, they keep our island alive. Everything here is magical. From the lava in the volcano to the waterfall of youth. The sailor grew greedy, "waterfall of youth?! I'm exhausted, please could I camp on the beach, I will leave before sunrise?". The panther agreed.

The sailor chose a spot to sleep. The island grew silent. When he was sure no animal was awake he took out his bag and flask and tiptoed into the rainforest. There they were, the glowing red berries. He filled his bag full and crept slowly away. Next, he went to the waterfall. As quietly as he could he filled his flask with clear blue water. He used his compass to work out exactly where the island was as he planned to return for more. He crept silently, to the beach, found his boat and set off. Just as he sailed the island awoke, animals were howling, squawking and crying. The island glowed with a red light. The sailor sailed away as quickly as possible. He checked his bag, the berries were still red as rubies. Just as he was safely away he noticed that his berries stopped glowing one by one and faded away. He opened his flask and realised the water was disappearing too. He quickly tried to drink some but it was too late. The water had gone. When he looked back at the island there was nothing there - the whole island had vanished without trace.