A cat’s-eye view of the fastest hunt on land 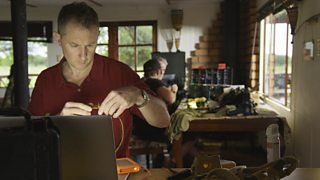 Mike and the team spent hours developing kit that would capture amazing footage useful for both scientists and film-makers.

Cheetahs are iconic predators possessing incredible speed, grace and agility. Over the past 100 years their numbers have declined by 90%, leaving approximately 7000 individuals. Consequently, their conservation status may change from vulnerable to endangered.

Reasons for their decline include: habitat loss, human-wildlife conflict and the illegal wildlife trade.

Namibia has the highest number of wild cheetahs, but 95% of individuals there live on agricultural land, where they face persecution, despite studies which show they’d prefer to predate wild prey than livestock.

You might think of cheetahs as ‘open plain’ hunters, but in Namibia they have had to adapt their strategy to deal with patchy, and sometimes dense vegetation as well as with human disturbance such as roads and fences.

Understanding the intricacies of cheetah behaviour, including how they move and hunt in different habitats, is key to helping us conserve the remaining few wild individuals. 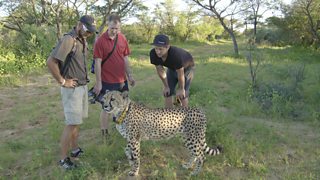 To study how cheetahs in Namibia hunt, my colleagues and I at Harnas Wildlife Foundation attached data loggers containing accelerometers and magnetometers (devices that measure both movement and direction, recording at 40Hz) as well as fast-logging (5Hz) GPS units to cheetah collars. In addition they had cameras strapped to their heads. Devices were light, unobtrusive, and able to cope with the heat.

Cheetahs are thought to be the fastest terrestrial animal that has existed and are capable of running at speeds of up to 70mph (115km/h). Interestingly, this often-quoted maximum speed was achieved with a cheetah chasing a car on a runway. In reality, prey chases often occur at much slower speeds of between 30-40mph.

Nonetheless, the hunts of these amazing cats, in which they use bursts of high-intensity power to catch prey by sprinting over sort distances, are exciting to track. The cameras have given us a cat’s-eye view of the fastest over-land hunt on Earth, and help record in exquisite detail how cheetahs interact with their environment.

In the first measurements of their kind, we show that cheetahs creep up on unsuspecting prey from cover and initiate attacks by rushing out into open areas. As cheetahs bear down on their prey, they slow down, and follow prey which execute increasingly rapid (and more desperate) turns. Unexpectedly, instead of decreasing energy expenditure as they slowed, cheetah energy costs were maximal; presumably changing direction is incredibly demanding. 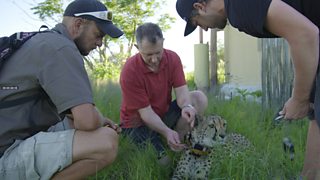 In more wooded environments, therefore, cheetahs use more power to turn rapidly and less to accelerate fast in a straight line. Whether this leopard-like strategy is sustainable as the vegetation thickens further is unclear.

Our research shows that cheetahs are equally effective hunting in open areas as in more wooded ecosystems and that they move and hunt during the night.

Technology is revolutionising our understanding of wild animal behaviour.

Over the last five years, there has been huge development in both the hardware and the software needed to produce logging devices that can be deployed onto wild animals with which we can then record and interpret their movements.

These studies enable us not only to understand how cheetahs survive, but also to predict how they and other endangered species may cope under global change.