About BBC at the Quay

BBC at the Quay is a live entertainment festival being held during the Commonwealth Games. The site, directly outside BBC Scotland’s headquarters building at Pacific Quay, is hosting a huge variety of live and recorded radio and TV programmes and it's a unique opportunity to come along and enjoy your favourite shows.

Entrance to the site is free and you don’t need a ticket to get in (except on the Opening Night of the Commonwealth Games).

No animals allowed on site except guide dogs.

Some of our shows are ticketed and if you applied for a ticket to be in the audience and were successful - congratulations! If you didn’t manage to get a ticket, don’t worry, you can still come along and enjoy other activities on site.

There’s plenty to do every day at BBC at the Quay and highlights include:

In the Zone – test your body’s capabilities against top athletes

Get Inspired – try out a new sport

BBC R&D - experience the future of viewing on TV, tablet and smart phone

HMS Bangor – take a tour around a Royal Navy minehunter

DigiZone – code your own Sherlock Game, programme a robot and play music on vegetables

We’re live streaming some of the music shows and programmes on the website including the Radio 1 Breakfast Show, Radio 2’s Ken Bruce, Another Country with Ricky Ross and a special show from The Radiophonic Workshop.

And there’s loads more too! You’ll find full listings in the What’s On section of the site. 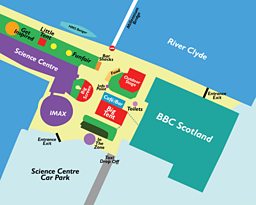