Should I worry about air pollution?

Our cities may look less polluted now than they did in the hazy smog-filled days of decades gone by, but with the numbers of vehicles on the UK’s roads at an all-time high, air pollution is still a growing problem. 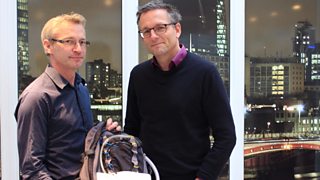 In 2016 a report from the Royal College of Physicians stated that each year in the UK, around 40,000 deaths are attributable to exposure to outdoor air pollution and the World Health Organisation estimates this figure could be 7 million across the world each year.

This means that air pollution is now one of the leading causes of preventable deaths. So how worried should we be, and what can we do to reduce our risk?

What is air pollution?

Air pollution is a term describing everything from the gases produced during the burning of fuels to the very fine particles that come from damage to brake pads, wear and tear on the roads, building sites and general dust. Each of these reacts differently with the body and causes different health effects.

Firstly, the nitrogen dioxide (NO­₂) produced when fuel (particularly diesel) is burned is linked to respiratory conditions and for people with underlying medical problems like asthma it can trigger breathing problems.

However, of bigger concern to human health are fine particles, or particulate matter, particularly those called PM₂.₅.

As a group, this means any particle with a diameter of less than 2.5μm (1/40th of a millimetre) which is about 50 times smaller than the width of a human hair. Unlike larger particles which our body can expel easily, these particles can get deep into our lungs, into areas where we don’t have as many defences to break them down or to remove them. Some scientists think they may even be able to make their way into the bloodstream. While the particle itself may not be a problem, they are often carrying complex chemicals. Some of these can trigger reactions in the body, causing cell damage and inflammation as the body desperately tries to attack the particles, all of which are linked to various diseases.

What are the health effects?

Michael met Prof. Frank Kelly, one of the world’s leading experts on the health impacts of air pollution. Research has shown that if we are exposed to the high concentrations of air pollution that exist in many of our cities, towns and industrial areas on a long-term basis, air pollution will have impacts on our health. There are clear links between high pollution areas and increased morbidity. Air pollution has also been linked to conditions ranging from cardiovascular disease to dementia, Alzheimer’s and stroke.

Air pollution isn’t just confined to urban areas either – in rural and coastal areas there are also problems with ozone in the summer and secondary pollution drifting in from the continent. Data suggests that for some people there are also short terms health impacts - on days of high pollution there are increased hospital admissions and 999 call-outs for a range of health issues including respiratory problems. In urban areas like London, Prof. Kelly says the average lifespan could be reduced by between three and nine months on average – within this some people may not be affected at all, but others could lose a decade or more from their life.

Prof. Kelly is also concerned about children being exposed to air pollution. Studies in the US, China and the UK have shown that air pollution can slow the development of children’s lungs. Childhood exposure is important because our lungs stop growing when we are about 18 and anything that impedes that growth is irreversible, so it can have lifelong consequences. In California this risk is taken so seriously that there are laws dictating that schools should be built a certain distance away from main roads.

The elderly and those with respiratory and cardiovascular issues are also particularly at risk and should consider taking extra precautions when pollution levels are high.

With the help of Dr Ben Barratt, who regularly measures pollution levels around London, Michael measured his own exposure to pollution while walking around the city. 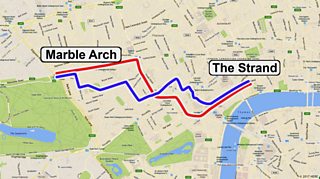 Monitoring equipment provided by Ben allowed Michael to measure the levels of PM₂.₅ and black carbon he was exposed to as he walked.

Black carbon is a type of PM₂.₅ that is a good measure of the pollution coming from traffic emissions, particularly diesel engines.

Michael took two walking routes, firstly from King’s College London’s Somerset House campus on The Strand, to Marble Arch – a route that took him along some of London’s busiest roads.

After a break, Michael then walked back to Somerset House, but this time along quieter routes and backstreets.

The results were then analysed by Ben and his team at King’s College, London.

As soon as Michael stepped onto The Strand there was a spike in the amount of pollution he was exposed to. These high levels continued along the route, but particularly high levels were recorded at busy junctions around Piccadilly Circus and along Oxford St. Interestingly, at the end of his walk when Michael stopped at Marble arch for a coffee, high levels of pollution were still recorded despite Michael being indoors, because the doors of the coffee shop were open.

On Michael’s return route using quieter streets he was still exposed to air pollution but the levels were generally lower. However we saw a big spike in the amount of PM₂.₅ and black carbon when he crossed a busy road and again when he passed an idling vehicle.

Various factors like the weather and traffic conditions can affect pollution levels on a day-to-day basis, but other studies carried out by Dr Barratt and his group have shown dramatic differences between journeys through the city. In some cases where two people set off at the same time for the same destination but took different routes, the people on the quieter routes could be exposed to up to 70% less air pollution.

Finally, at the end of Michael’s walk, he hopped into a taxi. Surprisingly, this is actually where he was exposed to the highest levels of pollution. Dr Barratt confirmed that this is a common observation in congested traffic because each vehicle’s air inlet sits just behind the exhaust of the vehicle in front.

So what can we do?

There are many simple steps we can all take to reduce our risks from air pollution.

And if you do walk or cycle

When in a car

We should all be worried about air pollution, but although we need the government to introduce more protective legislation and policies, there are steps we can all take to not only reduce our own risk, but that of those around us.

Simple things like cycling or walking instead of taking the car, closing vents and windows when stuck in traffic and even just taking a more scenic route through side streets and parks can all help.

More importantly, getting out and about is vital for our health in general, so don’t let worries about air pollution stop you leaving the house.

Just change your day to day habits a little, consider not buying a diesel car and enjoy taking in more greenery as you walk or cycle!