Is this the coolest artist at the Venice Biennale?

In a filmed postcard from Venice, Angolan-born artist Nástio Mosquito shows BBC Arts around his own exhibition and also visits the Belgian and Japanese pavilions to highlight some personal favourites. And below, we take a closer look at this intriguing young artist. 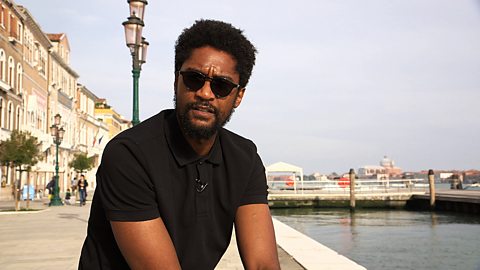 Nástio Mosquito in one of his videos

“Don’t be cool, be relevant,” runs a slogan in one of Nástio Mosquito’s videos, before adding the kicker, “Yep! And if you can be relevantly cool, good for you”. On the evidence of his current show at the 56th Venice Biennale, this stylish Angolan artist easily does both. 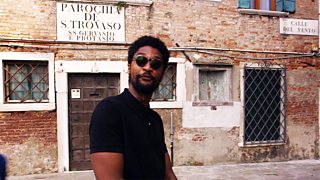 In 2014, he was the joint winner of the Future Generation Art Prize, which is awarded to artists under 35.

As the jury succinctly put it; “Combining text, performance, video and installation in a distinctly original manner, Mosquito re-invents storytelling for our current moment”.

On the back of this award and a successful exhibition earlier this year at Birmingham’s Ikon Gallery called Daily Lovemaking, he’s now garnering plenty of attention. That show makes up the backbone of his Venice offering.

With a background in broadcast (he has worked as both director and cameraman) Mosquito is obviously media savvy, able to balance a career as an idiosyncratic singer - he gave a private performance in Venice - and as an equally idiosyncratic fine artist and occasional slam poet.

Mosquito is unafraid to take on edgy subjects. 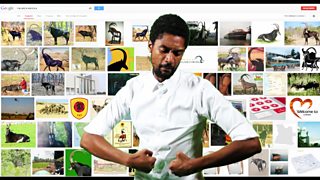 In one video, Demo de Cracía (2013), he plays an African singer shooting a video who has a breakdown, questioning his identity when he realises he can’t dance.

He is happy to adopt different personas in his videos, sometimes to ironic effect. In the expletive-laden Nastia’s Manifesto (2008) he seems to take on a Russian accent and develop an amoral character who is both charismatic and scary, who proclaims 17 often outrageous ways to be successful.

Mosquito was born in Huambo, Angola, educated in Portugal and currently lives in Belgium. After Venice, you can’t help but think his globe-trotting is going to accelerate.