Chestnuts roasting on an open fire are synonymous with the festive season, but remember, chestnuts are for life – not just for Christmas!

In The Food Programme, Rachel Roddy and Sheila Dillon share their love of sweet chestnuts and their importance to both Italian and British cooking. Here are nine crunchy facts about everyone’s favourite festive nut.

1. You can cook chestnuts using a shovel

If you want to get into the traditional spirit and (in the words of the famous yuletide song) roast your chestnuts on an open fire, then be sure to score the skins so they don’t explode, pop them on a shovel, and place them over the hot coals. Take care to turn them regularly so no one side gets too charred and they are evenly cooked and tender. Too much effort? Try toasting them on the hob in a heavy frying pan.

2. A damp tea towel can help to get the skins off

The contents might be delicious, but is it worth all the effort of cracking and removing the stubborn shell? Thankfully, there is a simple trick to help with this. To get the shells off chestnuts after roasting them, wrap them in a slightly damp tea towel. The steam gets under the shells and… Bob’s your uncle! There’s also the added benefit of being able to warm your hands as you work.

Sweet chestnuts were an important part of the Roman diet. They ground them into flour or coarse meal to make bread, and Roman soldiers were fed a type of porridge made from chestnuts before heading into battle. Because they were such a crucial food source, the conquering Romans planted sweet chestnut trees across Europe as they went – including Britain. 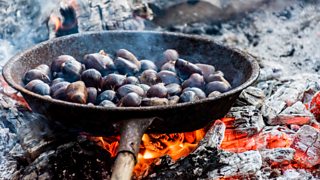 How to make a warming winter salad

4. Chestnuts used to be a staple food in Italy

Until “the late 1950s, when the Italian economy took off, many Italians did live in a constant state of food insecurity,” states Fabio Parasecoli, Professor of Food Studies at the New York University. In areas where it was hard to grow grain, chestnuts instead became the staple food of the poor: “In areas on the Appennines in Central Italy, people really focused on chestnuts, which grew really well in the area,” Fabio says. They took care to multiply the chestnut forests so they had an easy and cheap way to feed themselves – and a source of wood to boot!

Where we have hot dogs, the Italians have chestnuts. Throughout the winter months you will find vendors on every street corner in Rome serving freshly roasted sweet chestnuts (or “caldarroste”) from paper cups. These chestnuts come from Abruzzo, around 90 miles east of the city, where there are hundreds of square miles of forests of sweet chestnut trees.

We are of course partial to a roast chestnut, but the nut can also be boiled, pureed, grilled, steamed, deep-fried, candied or (as aforementioned) ground into flour. Chestnuts can be churned into ice cream or stirred into savoury stuffings. Fabio Parasecoli still cooks up his grandmother’s chestnut and chickpea soup on Christmas Eve, and the Tuscans make a chestnut cake called “castagnaccio”, which combines chestnuts, walnuts, olive oil, raisins and rosemary. However, the one way you shouldn’t eat this versatile food is raw – chestnuts contain tannic acid, which can upset the stomach!

The one way you shouldn’t eat this versatile food is raw – chestnuts contain tannic acid, which can upset the stomach!

7. The chestnut is the only nut that contains vitamin C

Chestnuts are a great source of potassium, as well as minerals such as iron, calcium, magnesium, manganese, phosphorus and zinc. They also contain B vitamins and are low in fat. Most notably, however, they are exceptionally rich in vitamin C – with a 30g serving providing 20% of our recommended daily intake. The high concentration of vitamin C and other antioxidants make them a friend to our immune system at the time of year when we need it the most!

8. Over 80% of the world’s total crop emanates from China

These days we get most of our chestnuts from China. In fact, China dominates the market, producing 22 times more chestnuts than the next largest producing country. That’s over 80% of the world’s total crop! At present the Chinese have a total crop of 1.8 million tonnes, but this is expected to climb to over two million tonnes this year.

9. The oldest chestnut tree in the world grows on an active volcano

“Castagno dei Cento Cavalli” or “The Hundred-Horse Chestnut”, is the largest and oldest known chestnut tree in the world. It is between 2,000 and 4,000 years old and, when it was measured in 1780, had a circumference of 190 feet. The tree has now split in to several large trunks but they still share the same roots. The tree sits on the eastern slope of Mount Etna, just 8km from the Sicilian volcano's crater! According to legend, the tree gained its name after a Queen and her entourage of a hundred knights took shelter under its branches during a storm.