Apathy in the UK

Comedian and broadcaster Phill Jupitus takes a creative look at boredom in a new Radio 4 documentary. Here he recalls his halcyon days of pure adolescent boredom.

There was nothing any good on the telly. All the shops were shut. We had no plans. Sundays were the worst.

It was almost like we were culturally pre-programmed to be bored on a Sunday.

It wasn't like we couldn't find something to do, but it was almost like we were culturally pre-programmed to be bored on a Sunday. As an adult now, I think back to those days, berating my younger self; "Well do something then! Read a book! Go for a walk! Play a game!" In fact, ALL of the things that my parents would say to me back in the 1960s and 1970s.

This resentment at being bored became more intense as I grew older. My preteen years were filled with that natural, awkward self awareness coupled with the niggling anxiety that everyone else was having a better time than me. (Mostly those who got more pocket money). My long suffering parents would always reach a tipping point where they would force me to go out and do my moping round someone else's house. But rather than solving the problem, being with other bored mates actually made it worse. Like misery, boredom LOVES company. 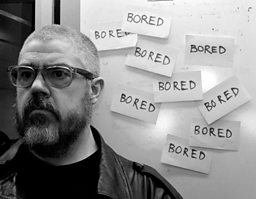 These were the halcyon days of pure adolescent boredom. Myself and three or four mates would just wander around our quiet dormitory town. We had several regular stopping points. The park gates. The bus shelter. The rec. The other bus shelter. Hours and hours of aimless meandering. Too young for the pub. Too old for the swings. No hobbies. No girlfriends. Seething parents didn't want half a dozen lumbering pre-teens, slouching around their living rooms, moaning about being bored and scarfing all the biscuits. We were like zombies in parkas.

Boredom has transitioned from childhood irritation and teenage state of being to finally being a luxury.

With maturity more diverting options presented themselves. Subsequently boredom became something that I was troubled by less and less. An active social life, a growing fascination with culture and ideas, a part time job, a girlfriend, all these things made boredom a rare occurrence.

Now, as a father of two with a busy career, boredom has transitioned from childhood irritation and teenage state of being, to finally being a luxury. The responsibilities and anxieties of adult life leave no time to be bored. There is always something else that requires your attention. It is only in the repetitive or the routine where I can even start to approach that familiar feeling. Long walks, dull domestic tasks, driving. But now rather than feeling oppressed by it, I briefly welcome it, before the realisation that I need to be doing something more important instead. Now I understand that the real reason my parents resented us being bored so much was jealousy.

So the next time you find yourself feeling bored, count your blessings.

Listen to Phill Jupitus present Being Bored: The Importance of Doing Nothing online now.