What are the Northern Lights and where can I see them in the UK?

As His Dark Materials approaches it dramatic conclusion, Lyra races north where she encounters the mysterious Northern Lights. But you don't have to travel to the Arctic to witness this incredible natural phenomenon — it is possible to see them from the UK.

The Northern Lights, also known as the Aurora Borealis, are an extraordinary and beautiful lightshow seen high up in the night sky. They can form rippling curtains of colour that are most commonly green, though yellow, red and purple can also appear.

Those lucky enough to have seen a display will often describe it as a poignant moment. Speaking on the Brainwaves podcast, physicist Dr Melanie Windridge recalled her own first encounter with them:

"I felt incredibly grateful ... to see this light moving in the sky. It does move you ... maybe it’s the other worldliness of it all." 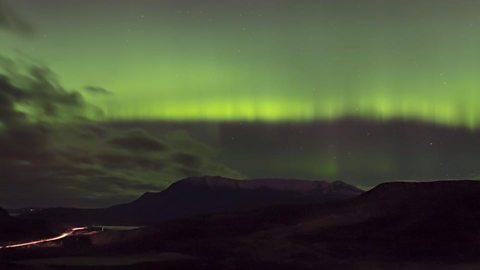 How are they caused?

According to Dr Windridge, the lights appear when charged particles from the sun called the solar wind interact with Earth's magnetic environment to accelerate electrons into the atmosphere at the north and south poles. There they collide with oxygen and nitrogen which creates light.

Where can I see them?

The aurora occur in rings around the poles, so to see them clearly you'll need to be as far north as possible and in an area free of light pollution.

Dr Winridge explains, "The area where they have them most frequently is called the aurora zone. That is, broadly speaking, between 60-70 degrees latitude. It stretches through Alaska, Canada, the tip of Greenland, Iceland, northern Scandinavia and northern Siberia."

"If you're further out of that zone, so in Scotland, say, it takes a bit more elevated solar activity to bring that ring down."

"It's difficult to predict them, but the sun goes through an 11 year cycle where its activity waxes and wanes, so when you're in a peak or a solar max there’s probably more auroral activity, more coronal mass ejections coming and faster solar wind hitting the earth causing the aurora."

Why do they look better in photographs?

"We have elevated expectations of the aurora now because we see so many incredible pictures," says Dr Windridge.

"But the camera can absorb a lot more light than the human eye can, so effectively the camera can see more than you can. It's there but you just can’t see it. The human eye is not as sensitive to red wavelength, it's much more sensitive to the green and the yellows and so you often see a lot more of the red colours coming through in the photographs than you will remember seeing by eye."

Stunning displays of the Northern Lights