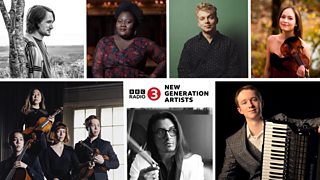 The BBC Radio 3 New Generation Artists Scheme helps to support young musicians on the threshold of an international career to reach the next stage of their development. It brings some of the world’s most promising new talent to listeners across the UK through BBC Radio 3 broadcasts.

The stars of tomorrow

As part of the BBC's commitment to developing and nurturing young talent, BBC Radio 3 launched its New Generation Artists scheme in the autumn of 1999. Now well into its second decade, the scheme has acquired the reputation of being a world leader for young artists.

Every Autumn, six or seven artists or groups who are on the threshold of an international career are invited to join the scheme, which offers them unique opportunities to develop their talents. These include concerts in London and around the UK, appearances and recordings with the BBC performing groups, studio recordings for Radio 3 and, last but not least, the possibility of appearing at the BBC Proms.

As part of the scheme Radio 3 has also collaborated with several record companies, including nine co-produced CDs in the EMI Debut series, three of which (Belcea Quartet, Simon Trpceski and Jonathan Lemalu) won Gramophone Awards for the best Debut CD of the Year. There have also been co-productions with Harmonia Mundi, BIS, Sony Classical and Signum among others, while a number of New Generation Artists have also featured on BBC Music Magazine cover CDs.

New Generation Artists regularly feature in some of Britain's most prominent festivals, from Cheltenham to Edinburgh International Festival. They also have the opportunity to commission new works, thanks to a partnership between Radio 3 and the Royal Philharmonic Society. The composers involved to date have included Simon Holt, Geoffrey Burgon, Augusta Read Thomas, Karin Rehnqvist, Mark-Anthony Turnage and Alexander Goehr.

The New Generation Artists come from a wide field and provide a representative cross-section of the most exciting British and international young artists. They are truly the stars of tomorrow.