From balti to bhuna: the ultimate guide to curry

Spicy or mild? Sweet or sour? Overflowing with almonds or nut-free? Telling curry dishes apart and choosing which to order can be an almighty challenge for the curry novice.

As the Food Programme delves into the world of South Asian cuisine with Birmingham's Beloved Balti, we take a closer look at classic curry house fare.

Which dishes were invented by Brits? Where does chicken tikka masala hail from? And which recipe will really blow your socks off? For all the answers, take a bite of our guide to curry.

The mild and creamy korma is a good entry-level curry for the spice-adverse. The pale yellow dish contains meat or vegetables, which are braised with yogurt or cream, and mild, fragrant spices. Sometimes almond, coconut or fruit is added. The origins of korma date back to 16th Century North India and Pakistan, where it was a delicacy served by the Mughal Court kitchen. Rumour has it that a famous white version of the dish was served to Emperor Shah Jahan and guests at his unveiling of the Taj Mahal.

Tikka means pieces of meat or vegetable. Masala simply means a blend of spices. The result? Chunks of meat marinated in spices, pushed onto skewers, dry-roasted in a tandoor oven and then dressed in a flavoursome, vivid orange, creamy, tomato sauce. The origins of chicken tikka masala – a favourite food of the Brits – is widely disputed. Some claim it hails from the Punjab, some from Birmingham and one Pakistani chef – with an eatery in Glasgow’s west end – has claims on the concoction. 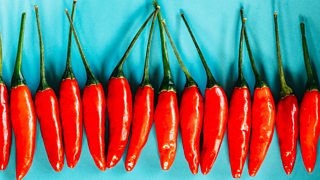 The science behind what makes chillis hot.

Chicken tikka masala with a good helping of coriander

Pasanda is another curry derived from a dish served in the court of the Mughal emperors. The Urdu word pasande translates as favourite, which refers to the prime cut of meat that would have traditionally been used. In UK curry houses today, the pasanda is a pale yellow, mild (and often sweet) curry that contains cream or coconut milk, and ground almonds or cashews.

The balti curry emerged out of Birmingham in the early 1970s.

This dish is all about the vessel it’s cooked and served in. The word balti is found in Urdu, Hindi and Bengali, and means bucket, although it is more of a thin steel or iron wok. Meat and vegetables – like onions, spinach, potato, and mushrooms – are cooked up quickly over a high heat, much like a stir-fry. The Brummies are claiming this one as their own, with the dish emerging out of Birmingham in the early 1970s.

Here's a recipe for chicken and spinach balti.

The name bhuna again refers to the style in which the curry meat is cooked. In Urdu, bhunna means to be fried. The dish, which originates from Bengal, is typically prepared by frying lots of spices at a high temperature. The meat is then added, and simmers away in its own juices. The result is a thick, intensely flavoured sauce. The dish is often served with green pepper and sliced onions.

The name of this dish, which originated from Hyderabad, translates as double onion. It’s probably no surprise then to hear that it’s prepared with large amounts of the vegetable, which is used at two stages of the cooking process – both in the sauce and as a garnish. A sour note is another key element of this curry, which normally comes in the form of a large squeeze of lemon.

A dhansak is made by cooking meat or prawns with a mixture of lentils and vegetables. And because the British seem to love all things sweet, the UK version often contains pineapple. Well, if it works on a pizza…

Try your hand at this lamb dhansak recipe.

These bags might not fit on your spice rack.

Feast your eyes on this lamb rogan josh.

Rogan josh consists of pieces of braised lamb in a rich gravy. The flavour comes from garlic, ginger, browned onions and aromatic spices (like cloves, bay leaves and cardamom). Rogan josh is one of the signature dishes of Kashmiri cuisine, and a stalwart of the region’s multi-course meal, known as the wazwan. In the Kashmiri version, the rich red colour is a result of the local chillies – whereas British restaurants will add red peppers and tomatoes for a splash of scarlet.

Don't try and ask for a madras curry when on holiday. The madras we know and love was conjured up by British Bangladeshi restaurants in the 1970s.

A spicy number! The madras is red in colour, made with heavy use of chilli powder and strongly spiced. Madras curry is said to originate from the city of the same name but ask for a madras in India and you’ll struggle – the term is a British invention. The madras you find in restaurants here is also not an authentic version of the curry English merchants would have been served up in Madras (now Chennai) hundreds of years ago. The madras we know and love was conjured up by British Bangladeshi restaurants in the 1970s.

The jalfrezi is another Anglo-Indian invention. The British in colonial India were always looking for ways to use up their leftovers, so they would fry them up with chilli and onion. With all the green chillies in this dish, it can range from medium hot to hold-on-to-your-hat hot. In fact, the word jalfrezi comes from the Benghali word 'jhal' meaning spicy.

Instead of ordering a takeaway, make your own chicken jalfrezi.

Not for the faint-hearted, vindaloo is a fiery dish that frequently including potatoes. The vindaloo served here is a far cry from the original, which hailed from Portuguese-occupied Goa. The name derives from a mispronunciation of the Portuguese dish carne de vinha d'alhos (meat with wine-vinegar and garlic), which the European explorers were dining on back in the 15th Century. It is thought that some confusion around the Hindi word for potato – aloo – could explain the later addition of potatoes.

The phall (or faal, phaal, or phal) was dreamt up by British Bangladeshis in Birmingham. And this one is hot. Hotter than a vindaloo and hotter than most of us can handle, due to the ground scotch bonnet or habanero chillies that are often used to create the volcanic curry. Have a pint of milk by your side and proceed with caution. 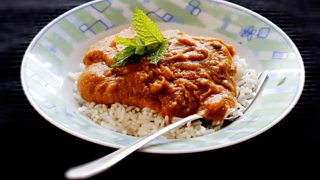