Print the legend: Capitol Records at 75

Nat, Frank and Dino created the myth. John, Paul, George, Ringo and Brian burnished it. Capitol Records, in the heart of Hollywood, looked down on almost every other US label. On its 75th birthday, publisher Taschen has mined the label's archive for a new book. ALASTAIR McKAY considers the company's past glories.

Architecturally, the Capitol Records Tower is a myth about a dream. It is, if you read the foreword to a new book celebrating Capitol’s 75th anniversary, a structure which symbolises the optimism of California in the mid-20th century. The singer Beck, a native of the Golden State, suggests that this “circular oddity in a landscape of square” represents “a place between art and commerce, jazz and rock’n’roll; between a golden age, urban decay, and rebirth.”

The Capitol tower is a stack of vinyl on the Hollywood skyline. A rocket-age Hadron collider spiralling out of showbiz ground zero.
Beck

Turning poetic, Beck then calls the tower “a stack of vinyl on the Hollywood skyline. A rocket-age Hadron collider spiralling out of showbiz ground zero.”

That’s a lot of explosive imagery for a 13 storey office block. But, looking through the photographs of Capitol’s golden age, you can see why this Pisa-like structure, half a block from Hollywood and Vine, has come to symbolise that short, beautiful period where the words “music” and “business” were able to co-exist in the same sentence.

The building itself is often said to resemble a stack of records. That, though, is an accidental byproduct of the architect’s desire to create an ultra-modern structure. The circular exterior was said to be a matter of efficiency. But the design, by young architect, Louis Naidorf, was space age, standing 150 feet high, with a 90 foot spire on the roof, with a red light beaming out the word “Hollywood” in Morse Code.

The interior was state of the art, when the art was making and marketing hit records in which restrained good taste could be measured by the quality of the sound reproduction.

Capitol issued a company promo film in 1958, narrated by Tennessee Ernie Ford, which eulogised the movable sound panels in the building’s three recording studios, with wood on one side and fibreglass on the other, while also noting that the floors were a blend of concrete and cork to deaden the possibility of interference. 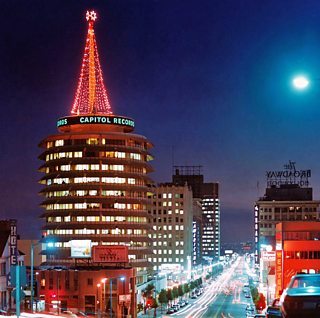 The Capitol tower at night in 1977 — its trademark spire lit to look like a Christmas tree. Photographer: Daniel Catherine. 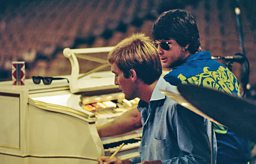 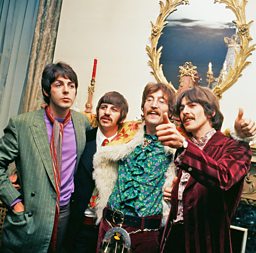 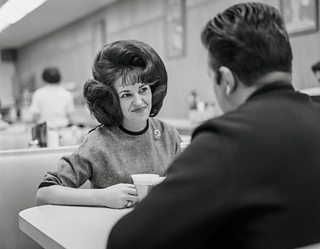 Wanda Jackson, The Queen of Rockabilly in Reno Nevada. Jackson was one of the rowdiest rockers of the 1950s, and was inducted into the Rock and Roll Hall of Fame in 2009. Photographer: George Jerman.

Then there was the view. “If it weren’t for the smog,” says Tennessee Ernie, “well, you could see all the way to the ocean.”

While Capitol was initially unsure about The Beatles' commercial prospects in the US, American audiences were less reticent.

The epitome of the Capitol sound is Nat King Cole’s Mona Lisa, an after-work cocktail of the sweet crooning which dominated the pre-rock’n’roll period. Kay Starr was a big success, as were Les Paul and Mary Ford.

Les Paul was also responsible for the quality of the sound of the Capitol studios. He oversaw the development of eight concrete echo chambers 30 feet underground, each with their own sound characteristics, allowing engineers to add reverb, lending the studios the aural qualities of a cathedral.

Capitol also reframed the career of Frank Sinatra - who oversaw the first recording session in the Tower - reinventing him as a saloon bar balladeer adrift on his own misfortune.

Capitol was startled by rock’n’roll, and relied for income on its country division, which laid the foundations for the twanging Bakersfield sound with the classic recordings of Buck Owens and Merle Haggard. There was plenty of reverb on Gene Vincent’s greatest hits, and the label found a new use for orchestral sophistication on records by Glen Campbell and Bobbie Gentry.

In 1962, Capitol signed The Beach Boys, who were considered at first to be a novelty act, though Brian Wilson had grander ideas. (Wilson’s masterpiece, Pet Sounds, was recorded mostly at United Western Recorders on Sunset Boulevard, not the Capitol Building).

As part of EMI, Capitol was gifted The Beatles, and while the label was initially unsure about the group’s commercial prospects in the US, American audiences were less reticent.

The Capitol story has continued, and subsequent decades have their moments. The 1970s produced Steve Miller and Bob Seger. The label’s response to punk was to sign Mink DeVille. The empty flash of the early 1980s was represented by Duran Duran.

There were hits from MC Hammer and the Beastie Boys, Bonnie Raitt and Garth Brooks, Radiohead and Coldplay, and more recently Katy Perry and Sam Smith, who have ensured that the label has more to look forward to than repackaging its past.


75 years of Capitol Records, written by Barney Hoskyns with a foreword by Beck, and edited by Reuel Golden, is published by Taschen. 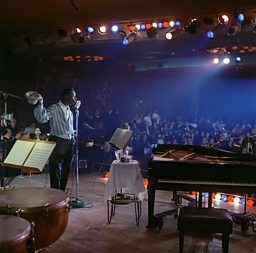 Nat King Cole at the Sands Hotel, Las Vegas, January 14, 1960.
The show was recorded for Cole's At the Sands album.
Photographer: Ken Veeder. 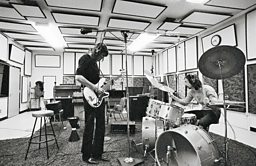 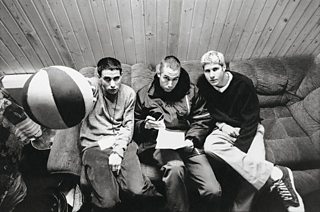 Beastie Boys pictured in Vienna in 1995 shortly after Ill Communication became the first of their three consecutive No. 1 albums for Capitol. Photographer: Ari Marcopoulos. 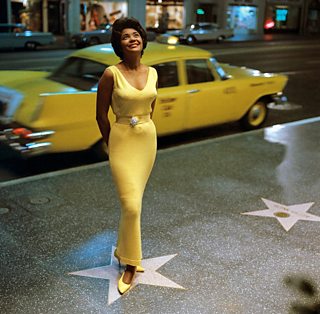 Jazz singer Nancy Wilson on Hollywood Boulevard, 1963, in the cover shot for her Hollywood — My Way album. Photographer: Ken Veeder. 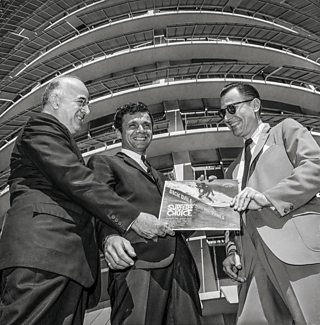 A beaming Dick Dale (centre) holds his 1962 Surfers’ Choice album as he and his father (left) celebrate their record deal at Capitol headquarters in 1963. Photograph: Capitol Photo Archives. 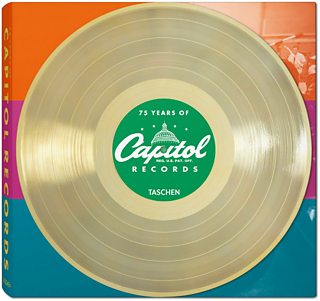 Front cover of 75 Years of Capitol Records, published by Taschen.