Pond scum: what you need to know about this peculiar food

Could you eat a green Victoria sponge? In The Food Programme, Sheila Dillon tries. She dives headfirst into the murky green and bright blue world of microalgae and cyanobacteria to meet the people who believe humble pond scum could be the secret to securing food for the world's growing population.

So what are microalgae? Where do they come from? And are the supposed health benefits to be believed?

Microalgae in a photo-bioreactor - part of a bio-fuel research process in a renewable energy laboratory.

Microalgae are single-celled micro-organisms that thrive in saline or fresh water and get their energy through photosynthesis. Cyanobacteria are also aquatic and photosynthetic. There’s a huge variety of microalgae on earth, but chlorella and the biomass of cyanobacteria known as spirulina are the two most commonly produced and used as food supplements.

A few years ago, spirulina became a social media sensation. Millions were sharing pictures of “mermaid smoothies” and “ocean bowls” dyed a dazzling, bright cyan blue by spirulina’s natural pigment. For some, the somewhat unearthly colour oozed healthiness – it was suddenly the new superfood. Tablets and powders of spirulina and chlorella were marketed as being packed with vitamins and minerals, iron and protein.

“People have been eating blue-green algae for a very long time. Several hundred years ago people in South America scooped spirulina out of ponds to supplement their diet.”

At Yeotown Kitchen near Paddington, spirulina and chlorella are key ingredients in the cooking. There you can try a green spirulina paleo cookie, a dairy-free spirulina ice cream, green spirulina energy balls and blue spirulina raw cheesecake. And that’s just for starters.

But Professor Alison Smith, Head of Plant Sciences at the University of Cambridge and one of the world’s leading algae scientists, explains how eating algae is a tradition that existed long before Instagram: “People have been eating blue-green algae for a very long time. There are reports from several hundred years ago of people in South America scooping spirulina out of ponds to supplement their diet.”

So, what are the benefits?

The high protein content makes microalgae an exciting, vegan alternative to meat. At the moment it tends to be added to food in small measures, more as a health gimmick. But Andrew Spicer, CEO of Algenuity, wants to use chlorella vulgaris to replace egg in things like cake and pasta.

Spirulina can even be used to make mayonnaise. It works like an egg yolk because it has what’s called a lipid – a mix of a protein and a carb. When you whisk it, it opens up and has the ability to blend two liquids that don’t combine normally.

What are the downsides?

Spirulina’s smell and flavour can be challenging. “The easiest way to describe it is when you stand in the harbour and there’s this mixed smell of fish and iron or metal,” says chef Simon Perez. And the colour also presents a problem. If you hand people a green loaf of bread, most people won’t want to eat it.

On top of that, there is some debate around the true health benefits of microalgae. Both spirulina and chlorella are high in protein but the claims that they are the nutritional answer to all our problems isn’t widely supported by science.

“Spirulina is essentially 55 and 70 percent protein by weight and it does have a better amino acid profile than other plant-based foods, but that doesn’t mean it’s better than the animal-based protein that we can get,” says nutritionist Rhiannon Lambert.

Microalgae does contain Omega 3, so that claim is true, but it’s a plant-based source known as DHA. While it is very beneficial, it’s less bioavailable and accessible to us than the Omega 3 we find in fish. 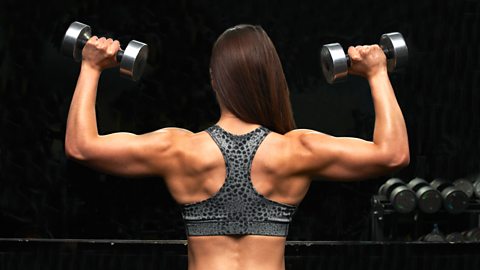 There's been a big growth in protein supplements as the ideal body type has changed.

Comparison between spirulina and chorella powder

What does spirulina smell like? The easiest way to describe it is when you stand in the harbour and there’s this mixed smell of fish and iron or metal.

The same goes for microalgae’s vitamin B12, a micronutrient that we all need for energy metabolism and our nervous system. “The problem with spirulina being hailed as having a large B12 component is that it doesn’t actually work,” says Rhiannon. “Yes, it contains some B12 but it’s not bioavailable in the body.” We can’t digest and use it like the B12 we can get from other sources.

Are microalgae the future of food?

Despite the downsides, including the dubious superfood credentials, microalgae do offer some huge positives. As the population increases, and the land available for agriculture becomes stretched, we need to find new ways to increase productivity.

Unlike other sources of protein, microalgae don’t require high grade agricultural land. “Microalgae and spirulina can be grown in all sorts of locations. In water, in the oceans, in ponds, in lakes and so on. Even on your patio and on snow,” says Alison Smith.

Green algae on the surface of the water

This means we can grow these organisms in cities and towns. Microalgae can even be grown in space – and could be used to feed astronauts on long missions to Mars.

And there might be a solution to the discouraging colour and smell. At Algenuity they are trying to lift these barriers by developing a range of algae where the chlorophyll is removed, creating an ingredient that has neutral, subtle colours and flavours instead. “What we’re trying to do is bring in a vegan source of protein that is relevant and timely and that can go in to multiple types of foods,” says CEO Andrew. “It’s time to look at new opportunities for food and new ways to use food instead of just looking at replacing like for like.”

Are microalgae the food of the future? Only time will tell. Now, blue cupcake anyone?