The History of Rasselas, Prince of Abyssinia

BBC Radio 4 presents a modern adaptation of the only novel by Samuel Johnson, the great Dictionary Johnson of 18th-century literary and 20th-century Blackadder fame. 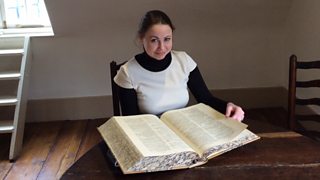 Following his Dictionary, Samuel Johnson is perhaps most famous for saying 'when a man is tired of London, he is tired of life…', but is also remembered for having the ability to sum up a universal truth in a succinct, and witty, manner: 'A man, Sir, should keep his friendships in constant repair'; 'The true measure of a man is how he treats someone who can do him absolutely no good'; 'Second marriage is the triumph of hope over experience'. I could go on.

Johnson was, however, a prolific writer of exceptional range, though he only ever wrote one novel. This singular novel, Rasselas, or more correctly, The History of Rasselas, Prince of Abyssinia, is hard to classify as a novel, per se, and it can certainly be seen as a philosophical narrative with strong classical roots, along with some more contemporary influences.

Essentially, it follows the adventures of a young and idealistic prince, frustrated by his isolated and pampered existence, accompanied by his inquisitive sister and his poet-friend, the philosopher Imlac, among others. Johnson addresses the ancient question of how we choose to live our lives, referred to throughout as our 'choice of life', or our pursuit of happiness.

As the action progresses, we meet various characters, humble and lofty, young and old, who each offer different perspectives on what path we should take to find happiness and how, if at all, we can reconcile ourselves with our own circumstances and thus find contentment.

Johnson published Rasellas just four years after his Dictionary and though written at at time when he was in in debt and in poor health, it is said it was completed in just one week. The story features exotic characters from Abyssinia (modern Ethiopia) and examines the human condition, and our constant fascination with the pursuit of happiness and whether the grass truly is greener on the other side.

Here are some hints at the big questions and pearls of wisdom to be found in Rasselas:

1) Feeling restless? An adventurous spirit, or the folly of youth?:

“I have already enjoyed too much; give me something to desire.”

2) Desiring the unattainable - the naive conviction of youth?:

'The prince... thought it unsuitable for a reasonable being to act without a plan, and to be sad or chearful [sic] only by chance. “Happiness,” said he, “must be something solid and permanent, without fear and without uncertainty.”'

“A man used to vicissitudes is not easily dejected.”

4) Time may well heal, so to speak (albeit eloquently):

“When the clouds of sorrow gather over us, we see nothing beyond them, nor can imagine how they will be dispelled: yet a new day succeeded to the night, and sorrow is never long without a dawn of ease.”

“Our minds, like our bodies, are in continual flux; something is hourly lost, and something acquired ... Do not suffer life to stagnate; it will grow muddy for want of motion: commit yourself again to the current of the world.”

“Great works are performed, not by strength, but by perseverance; yonder palace was raised by single stones, yet you see its height and spaciousness. He that shall walk with vigor three hours a day, will pass in seven years a space equal to the circumference of the globe.”

7) Ever the pragmatist, Johnson offers a caveat … :

“Be not too hasty ... to trust or to admire the teachers of morality: they discourse like angels, but they live like men.”

8) Should we test whether the grass is really greener? Make a decision. And live with it.

“Of the blessings set before you make your choice, and be content. No man can taste the fruits of autumn while he is delighting his scent with the flowers of the spring: no man can, at the same time, fill his cup from the source and from the mouth of the Nile.”